Today, June 18, 2010, would have been Paul McCartney's 68th birthday. As an anonymous commenter suggested elsewhere on the blog, let us celebrate his life on his birthday.

his LOVE,
his HEART,
his KINDNESS,
his GENTLENESS,
his COMPASSION,
his EMPATHY,
his GENIUS,
his TALENT,
his GENTILITY,
his RESPECTFULNESS,
his GENEROSITY,
his BRILLIANCE,
his UNIQUENESS,
his CREATIVITY,
his WISDOM,
his ABILITY TO BE A FANTASTIC SHOWMAN,
his INCREDIBLE BEAUTY (INSIDE AND OUT),
his APPRECIATION FOR LIFE,
his HUMBLENESS,
his FAITH,
his DRIVE,
his DEDICATION,
his SACRIFICES,
his WORK ETHIC,
his INCREDIBLE ABILITY TO MOVE THE SOUL,
his LAUGH,
his SMILE,
his BEAUTIFUL EYES,
his VOICE,
his YOUTHFUL ENTHUSIASM,
his OPTIMISM,
his SINCERITY,
his SOUL,
his VISION,
his UNMATCHABLE SPIRIT,
his INSATIABLE NEED FOR PERFECTION,
his DESIRE TO BRING JOY AND HAPPINESS TO OTHERS,
his PERSISTENCE,
his STRENGTH,
and his COURAGE.

Here are some light-hearted videos by which to remember the one and only James Paul McCartney, musical genius par excellence.


***ATTENTION: PIA IS A COINTELPRO OPERATION*** 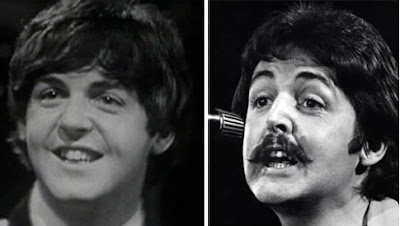 This is a continuation of my exposé of PI-Agents who work tirelessly to suppress the Truth about Paul McCartney's murder and replacement. This time, I will be focusing on Seaofgreen, who has recently threatened my career for speaking out for Paul. If you think there is nothing to the "rumor" that Paul McCartney is dead, ask yourself, "why the threats?"

Let me give you some background information about how this unfortunate turn of events transpired. It seems I angered seaofgreen, the laziest of researchers, when I proved a statement he made was false. He tried to claim that "No one before the college students of '69 suggested that Paul had been replaced." [Link] Of course, this was incorrect, because the rumor was going around London in 1967 that Paul was dead and replaced. I posted citations to my sources to back up my statements:


In 1967, the rumor spread through London that McCartney had died in November 1966 and had been replaced. The February 1967 (#43) issue of The Beatles Monthly Book, the Beatles' official fan club magazine, tried to squelch the "rumor":

Stories about the Beatles are always flying around Fleet Street. The 7th of January was very icy, with dangerous conditions on the M1 motorway, linking London with the Midlands, and towards the end of the day, a rumor swept London that Paul McCartney had been killed in a car crash on the M1. But, of course, there was absolutely no truth in it at all. As the Beatles' Press Officer found out, when he telephoned Paul's St. John's Wood home and was answered by Paul himself, that he had been at home all day with his black Mini Cooper safely locked up in the garage.

Brian Moriarty, “Who Buried Paul?,” from a presentation on March 17, 1999,http://ludix.com/moriarty/paul.html.

Seaofgreen got very angry that I proved him wrong. He said the following in a series of rude responses:

"Faulcon is a victim of her own behaviour (but also quite probably, childhood problems such as abuse)." [Link]

"I have to commend you on your persistent and proficient use of the 'straw man' tactic, trying to exasperate those who expose you into silence.

"The point here, which you are trying desperately to subvert, is not whether you or I believe that it was Paul who answered the phone, it is that the people of the the '60s believed it (thus quashing the rumours concerning his safety, not his "replacement")." [Link]

He even resorted to issuing a veiled threat against my career:

"Just think what this is doing to your career, faulcon; think on that." [Link]

He is warning me that if I do not Faul in line and stop trying to out the Truth about what happened to Paul (the real Paul), there will be serious repercussions. He is telling me that action will be taken to interfere with my livelihood if I do not shut up about PID.

Apparently, the threats against PID Truthers are acceptable to the David Icke Forum moderators. When I issued a complaint against his threat, seaofgreen's objectionable post was allowed to stand. However, when a fellow forum member politely suggested that other members ignore seaofgreen's rude, obnoxious and abusive posts, he was trounced by a moderator. He received this warning:

You have received an infraction at David Icke's Official Forums.

The David Icke forum is home to many different POV's and affords itself as an arena for open and free discussion on a wide range of subjects.

Asserting that members ignore other members simply because their opinion differs from your own or that they offer a challenge to your posts and theories goes against what the forum is about and is seen as provocative in nature.

if you wish to ignore member(s) please feel free to use the ignore function that is available within the User Control Panel.

Other members are free to choose who they include on their ignore list for themselves.

This infraction is worth 3 point(s) and may result in restricted access until it expires. Serious infractions will never expire.

Such rabid persistence can only make one think you're either brain dead or a paid shill. Here is what Philip Agee had to say about standard CIA training in the 1950's:

AGEE: "Camp Peary, Virginia. A secret CIA training center. So secret at the time that some of the foreign trainees weren't even told they were in the United States. We worked hard, I can tell you, for more than six months... "We had classes in propaganda, infiltration-exfiltration, youth and student operations, labor operations, targeting and penetration of enemy organizations."

Given that he was recruited in the CIA over half a century ago. I trust that modern training takes into account the Internet and routine cover up operations by subverting truth seeking discussion forums such as the this one?

Please, Mr. Icke, implement an IGNORE button in your forums so that we won't have to endure the endless seeping pollution of disingenuous shills.

In awaiting, I propose a moratorium on replies to Seaofgreen as long as his posts remain insulting, target specific members personally, defy any/all logic or offend otherwise. From now on I shall let him holler into the wind. As a 'Troll' he has proven to be undeserving of further attention.

So, apparently, rude, abusive, and threatening posts are quite OK with the Icke forum moderators, but suggesting that seaofgreen be put on ignore was way out of line.

This same moderator issued a warning against me for mentioning that Light_man had admitted to purposefully doctoring photos of Paul McCartney. This was after Light_man had been banned for committing a serious infraction of the rules - posting my picture. I received this warning:

as you have dissabled (sic) your pm function, i would ask that you do not discuss matters in regard to other members who are no longer here to answer such posts.
[I did not disable my account - it was disabled "for" me.]
i will remove the remark about lightman from this post, and ask that any further remarks are weighed with postal evidence of such so as to be fair.
thanks
Merlin.

I have to wonder why they coddle members who continuously threaten and abuse other members, but harshly punish the ones who are trying to open eyes to the Truth about Paul. It could be interpreted as one person suggested: "They want you to know they're on to you. Thus the otherwise senseless 'warning.' It was intended as a warning beyond forum guidelines, beyond common sense, unless you know how to interpret it as carrying greater significance."

Researching PID has really opened my eyes to how infiltrated some of the forums are. This was what Stephen DeVoy had to say:

[M]ost online forums are a kind of Trojan horse. They are offered on false pretences. Sitting behind the forum, the administrator may be more interested in things such as making money, identity theft, blackmail, extortion and governmental monitoring. Indeed, what I have discovered is that many online forums are run by retired police officers. Several I have encountered are run by a U.S. Army PsyOps agent. Others are run by intelligence agencies...

[Stephen DeVoy, "An Introduction to The Signs And Techniques of

Once someone attains the position as forum moderator, s/he can effectively and quietly control it by deleting unfavorable postings. The moderator can then steer the forum into failure by censoring postings, deleting memberships, flooding, and or accidentally taking the forum offline. If killing the forum is not the objective, then it can be used to misdirect newcomers and promote your agenda.

["Techniques for dilution, misdirection and control of a internet forum.," http://www.dailypaul.com/node/60831]

It seems likely the Beatles were hi-jacked by the Tavistock Institute to further the Illuminati's dark agenda of promoting the psycho-chemical warfare agent, LSD, to kids. Paul, probably unwilling to be a pawn for evil, was replaced by MI-6 or CIA wet teams. MI-6 psyops teams have tried to hide the fact that he was replaced. Now that more and more people are waking up to the fact that there is a CIAlebrity Paul impersonator, they are getting desperate to keep a lid on it. Thus, the issuance of "warnings" to those of us who shine a light on their dirty dealings.

PID Truthers intend to get to the bottom of Tavistock's program to engineer society using the Beatles and others to market their CIA's MK-Ultra mind control drug. There seem to be a number of PI-Agent low level operatives spreading lies, distorting Truth, assassinating the character of PID Truthers, and even resorting to threats.

Despite the threats, I will speak out for Paul as long as I have breath. Certain people are in a position to take action should it be necessary.