How Deep Do The PID Clues Go? Coincidence, Synchronicity, or Intentionally Planted?

We who investigate the Paul-Is-Dead phenomena frequently wonder if all of the Sgt. Pepper album's intentional clues have been found (there are many) or if there are more clues when one looks even deeper than before. I (and I can only speak for myself) also wonder if profound coincidences or somehow mystical synchronicities are a factor, as well.

Case in point. First, view this video of Faul telling us that one celebrity was left off of the Sgt. Pepper cover art, so first watch this...


O.K., so the guy who got left out and did not appear on the Sgt. Pepper cover was Leo Gorcey of The Bowery Boys movies. On screen, he was considered to be the leader of the gang. Originally, the Bowery Boys were a real gang of rough, tough, fighting firemen, about which the 2002 Scorsese movie Gangs of New York was made. The leader of the real, original gang was "Bill the Butcher." Those of us who study PID clues may raise an eyebrow considering the weird, recalled by the Capitol label in June 1966, 'Butcher Cover,' which was originally intended for the album Yesterday and Today. Bill the Butcher was shot dead, in a similar scenario as Rocky Raccoon, and his last words were, "Goodbye boys."

In 1945, Leo Gorcey, the star of a Hollywood movie series called Dead End Kids, demanded that the producer double his salary, which was refused. Gorcey quit the series and started a new one called, The Bowery Boys. One of the gang was played by Billy Benedict. In 1952, the Bowery Boys series movie release was Hold That Line in which Billy is replaced by Gil Stratton, who plays the role of 'Junior' (reminds me of the Faul song Junior's Farm). We've all heard the chant 'hold that line, block that kick' on The Beatles (the white album) in John Lennon's experimental Revolution 9.

It would be interesting, if one could find a copy of the Bowery Boys movie, Hold That Line, to see if its soundtrack contains the exact same chant, 'hold that line, block that kick' and if it could have been the actual source used as the sound sample mixed into Revolution 9.

Wikipedia has this plot summary for the Bowery Boys movie, Hold That Line...

The members of the local university's trust make a wager that anyone can succeed in college if just given the chance. They enlist the boys to attend the university to prove the theory. While the boys do not become academic scholars, Sach invents a "vitamin" drink that makes him invincible. They all join the football team and Sach becomes the star player, leading them to the big championship game. A local gambler sees an opportunity to make some money and he kidnaps Sach to prevent him from playing. Slip and the rest of the gang rescue Sach and return him to the game. Sach is out of "vitamins", so Slip plans a ruse on the playing field that distracts the other team and allows him to score the winning touchdown. Afterward, Sach cannot reproduce his "vitamin" formula, but he produces a new concoction that allows him to fly.


The role of Sach is played by the actor Huntz Hall, who, in the 1930's, appeared in both the Broadway play and then the film version of Dead End. In 1943, he appeared in the film, Don't Kill Your Friends. He was arrested for marijuana possession in 1948. After Leo Gorcey and Huntz Hall split up when Gorcey left the Bowery Boys in 1956, they reunited in 1966 in the movie, Second Fiddle to a Steel Guitar.

About the production of Hold That Line, Wiki has this note...

This is the first appearance of Gil Stratton, Jr. as a member of the gang, replacing William Benedict. Stratton was unhappy as a Bowery Boy, and he tried to keep himself as inconspicuous in the films as possible; he often gave his dialogue to Leo Gorcey or Huntz Hall.


Gil Stratton also had a part in The Wild One, in which the Lee Marvin character taunts the Marlon Brando character with the line, "the Beatles missed you."

A photo of Leo Gorcey was included in Peter Blake's original design for the Sgt. Pepper album cover, but was removed when Gorcey's agent demanded a fee for its use. Blake replaced it with a photo of Huntz Hall, who ended up representing the Bowery Boys on the Sgt. Pepper cover.

One wonders what the significance of all this is, if any, but a question does come to my mind --- could the original Paul have demanded more money, like double what he was getting in 1966, and did he threaten to quit The Beatles unless he received that much more money, and could it be that he was subsequently shot dead and replaced? Faul plays the role of Paul at the going rate, but later laments 'You never give me your money, you only give me your funny paper.'

Gorcey demanded double his money, which was denied him, thus ending Dead End Kids and he went on to demand money from the Beatles, but that time, he was replaced. The amount he wanted, some say $5,000 and others say it was only $400 was a small sum indeed for the wealth of EMI, so I doubt Faul's explanation, 'he wanted money, so screw him.' I think it was something symbolic. Gorcey demanded money, so he was out and Huntz Hall replaced him. The demand for money resulted in a replacement. Was that the symbolism intended?

How deep does the rabbit hole go and is it made of intentional clues, strange coincidences, mystical synchronicities, or all three? How many odd connections remain undiscovered?

Add Tina as a friend on MeWe
Posted by Plastic Macca at 4:14 PM 7 comments:

Plenty of evidence suggests Hillary Rodham Clinton (HRC) has a body double. Astute onlookers captured her stand-in on video last week. I am not going to repost the evidence at this time. I simply wish to make a few observations.

"Hillary" is not so much a person as a brand. She stands for the interests of the banking Elite. It does not really matter who is wearing the Hillary-mantle. She simply regurgitates catch phrases her handlers feed to her. Anyone can do this. All that is required is a good enough likeness to HRC to pass undetected by the public. As we can see, Double Teresa Barnwell was not quite good enough. 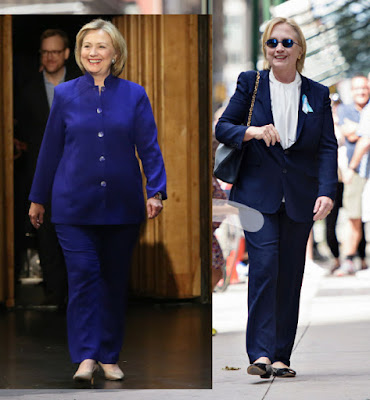 Please know that the outing of Fillary has hurt her campaign. Puppet doubles are more widely accepted now as facts of life than they were just a few years ago. HRC has lost credibility even in the eyes of those who think she just used a temporary stand-in. People will wonder now if it is the real Hillary at every public appearance.

It is possible HRC will be retired and replaced with a new candidate. "Health issues" will probably be cited as the official reason. We know the real reason, however.

JUST VIEWED THE WORLD PREMIERE OF EIGHT DAYS A WEEK

JUST VIEWED THE WORLD PREMIERE OF EIGHT DAYS A WEEK

I had to be there. The world premiere night (in the USA) of the new Ron Howard documentary EIGHT DAYS A WEEK.

Well, we Beatles fans loved it, the Fabs on the big screen with great sound and as a bonus thrown in after the credits, the restored and remastered BEATLES LIVE AT SHEA STADIUM, one of my favorite live concerts.

I can't give you a blow by blow review in detail, but I can give you some impressions.

Firstly, this is a Ron Howard movie. You know, he was Opie in the old Andy Griffith show and grew up to be a well bankrolled Hollywood movie director with his own production company and so forth. He did the Apollo 13 movie that cemented in everyone's mind that yes, we did go to the moon and everything NASA put out was true.

Here he is again, adding wholehearted credibility to the Beatles Anthology book and videos, the Hunter Davies 'official' biography, the bloated and seemingly endless Mark Lewisohn material, the simpletonish recent Sir Paul and Ringo interviews and so forth and so on.

The only trouble is, and there is no way to smooth over this, deep into the film when Howard cuts to the Sgt. Pepper sessions, the band looks like different people.

So, to sum up my first impressions... great compilation of the real Beatles with their energy, creativity, phenomenal impact, adolescent girls have multiple orgasms in their minds. if not their bodies, just at the sight, the experience of seeing The Beatles live in concert, excellent remastered sound, and at least an hour or two of great material left out, dropped on the cutting room floor, and does it sway my opinion vis a vis PID, no, not at all.

It is humorous to those of us who have looked into PID to see Ron Howard jump cut into the studio where the Sgt. Pepper Beatles are recording and I am so sorry, but it looks like the faces of different guys, not The Beatles. Even Ron Howard, American as apple pie (would therefore never lie to us) cannot smooth over the fact that something very strange happened in the autumn of 1966 and the winter of '66 - '67.

O.K., so we went to the moon. Apollo 13 was real. Sir Paul is the real Paul. Sure, O.K., got it, thank you Ron Howard for supplying us with yet more propaganda, Why would Apple pick Ron Howard of all directors to do this film? Maybe because, since he is Opie, he would never lie. The son of Andy Taylor would never lie. He lovingly portrays the narrative set forth in the Anthology book, which is that nothing strange happened to The Beatles on their way into the history books.

Why was this film made at all? What was the purpose of it? Well, if you are Sir Paul and you want the world to believe you are the original Paul, then this film serves your purpose very well.

The movie is very enjoyable. Just take it with a grain of salt. It does not, in any way, address the problems we know as... Paul is dead and was replaced.


Addendum by Tina
Thank you to Mark Devlin for passing this information on:

Faul, Ringo and Ron Howard did this interview for BBC6 music recently, where Ron Howard admits to 're-editing' old footage to make it more 'interesting.'

THE CONSPIRACY THEORIES SO CRAZY THEY COULD BE TRUE

Add Tina as a friend on MeWe
Posted by Plastic Macca at 10:05 PM 15 comments: