I got this email today from a concerned citizen at the hak5 forum informing me that "KathrynO" had asked for help to hack into and destroy the Paul is Dead Miss Him Forum. The email in pertinent part reads as follows:

It seems Psycho Stalker has come back under an alias and asked that your site is destroyed and for any hacker willing to hack into Paul McC.'s boards to retrieve private information.http://www.hak5.org/forums/index.php?showtopic=17764&st=0&p=169016&#entry169016

This is serious because she is breaking the law by soliciting a hacker to break into secure computer networks.

Here is what "KathrynO" posted at that link:


... Now I need help. The forum I joined concerns Paul McC, the biggest there is on this planet, and I know my stalker(s) who are also PID fraeks have been contacting the admins of this forum and are talking about me. I need to be able to get access to these conversations and maybe if all else fails get this forum destroyed also... Thanks guys, KathrynO

Needless to say, no one is stalking this woman. However, it is true that a number of people have contacted me about her stalking them.

At any rate, should someone hack the PID Miss Him forum, then we will know who is behind it and can take appropriate action.

UPDATE: Kathryn O'Connor of Detroit admitted she had ProBoards delete the Paul is Dead Miss Him forum. But never fear. There is a new PID MH forum here. Please join us!

Posted by Plastic Macca at 5:31 PM 8 comments: Links to this post

Tina Foster's interview from November 12, 2010 with Andrew Griffin on AxXiom Rule of Law Radio discussing the replacement of Paul McCartney is now available in the archives.

The PID, Beatles, & the 60's discussion starts at about 20 minutes in.

[Please support this blog ~ click on the ad links. Thanks!]

UPDATE: Comments from guest blogger, Getsmart, about the show:

[Note] that Tina Foster's arrival on the show is at minute 19':45" just so folks don't miss out on any of the revelations made or the highly deserved Intro reserved for this leading edge Truth Seeker investigating the program of Celebrity Replacements perpetrated by the CIA among other agencies and organizations.

I especially like the part about sharing the experience of first discovering that Sir Faul is not Paul and how once you open your eyes there is no going back plus the fact that this opens a Huge Can of Worms...

I will quote the radio host Andrew Griffin at minute 25':50" saying "I've looked at these comparative photos of Paul from 66 and before, and post that time - it's shocking how different they are, and that people couldn't notice that? Um, that's just a normal thing, why would that be different?"

Andrew Griffin also said the following at minute 29':00": "I also noticed that the veins in his hands, where he's playing the bass, were different! And how do you... you can't change that! So, I would say that's... I mean, there are all these clear clues that this is a different person. That's what just amazed me that more people aren't talking about this. Tina, we've got to go to a break here, but we'll be back and talk more about... Paul, Paul McCartney, call him what you will. He's not the guy we knew on Ed Sullivan back in '64, that's for sure!" His colleague Howard then chimes in with "we're talking about Paul or Faul, the NOT REAL Paul McCartney." with Andrew picking up the ball and referring to "that man who claims to be Sir Paul McCartney".

Folks, this was on national radio and has reached countless people who were either wondering why they had that uneasy feeling in the pit of their stomach when it came to Faul's McCartney vaudeville circus or who never knew the original James Paul McCartney and had never had a chance to compare his physique or his talent with the lame replacement substitute - Faul being to Paul what Aspartame is to Sugar.

I commend Tina for advancing the spirit of our ongoing investigation into the death of Paul by the appeal made on public radio broadcast for information regarding the suspicious death of Mal Evans at the hands of the Los Angeles County Police, which is in all probability tied to the murder of James Paul McCartney and his replacement by an Impostor.

The host of Truth Radio's AxXiom for Liberty program is an interesting and well informed person. For example, at minute 54':00" he talks about how many rock groups of the sixties had ties to the Military Industrial Complex and were coordinated out of Laurel Canyon, bringing the discussion with Tina onto the topic of TPTB orchestrating a 'controlled opposition' and extending their agenda through the CIA's MK-Ultra Mind Control Program to topple our civilization and bring on Helter Skelter as promoted by Charles Manson, embraced by Sir Faul and fomented by satanic rock groups all of whom endorse Aleister Crowley, the Beast 666 and co-founder of the Tavistock Institute for social engineering and cultural control.

Posted by Plastic Macca at 12:10 AM 22 comments: Links to this post

We can work it out 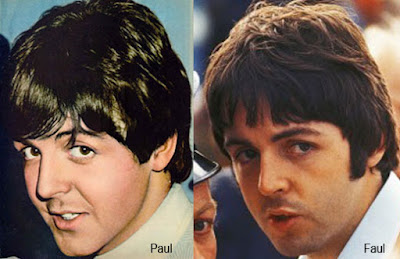 1/25/03 Daily Telegraph (London) 27
2003 WLNR 4174791
Daily Telegraph (UK)
Copyright © 2004 The Telegraph Group Limited, London. All rights reserved.
January 25, 2003
Section: NEWS
We can work it out
Craig Brown
Sub-Section:Way of the World
POSTER companies in America have airbrushed a cigarette from the hand of PaulMcCartney on the Beatles' Abbey Road album cover. They have performed this Leninist gesture in response to the anti-smoking lobby. In the late Sixties, the cigarette in question played a key role in a widely held conspiracy theory concerning the death of Paul McCartney. The rumour was rife that McCartney had died in a car crash, and had been replaced by a lookalike. On the cover of Abbey Road, "Paul" is barefoot (corpses are often buried without shoes), and his eyes are closed, as if dead. He is also out of step with the rest. The other Beatles are wearing tell-tale clothing: Ringo, dressed in black, is the pallbearer, George, in denim, is the gravedigger, and John, all in white, is the preacher. Behind them is a Volkswagen with the number plate "28 IF", signifying that Paul would have been 28 years old if he had lived. Furthermore - and this is where this week's news comes in - the lookalikePaul is holding his cigarette in his right hand, whereas every Beatles fan knows that the real Paul is left-handed. Spooky, indeed. It is quite a while - at least 25 years, in fact - since I last heard anyone repeating this great mound of evidence with a furrowed brow and a straight face. But with repetition, the list becomes peculiarly convincing. One can only hope that the air-brushing of Paul's cigarette by a person or persons unknown ignites afresh all the old conspiracy theories. Since the claims concern a celebrity, it can be only a matter of days before a 12-man police squad bursts into Sir Paul McCartney's home to ask him whether or not he is real. If he hesitates for even one second, he will be bundled off to the nearest police station, where he will be asked to run through the words of "Love Me Do" without hesitation, repetition or deviation. The police must get to the bottom of this great mystery for once and for all. If Sir Paul isn't Sir Paul, then who on earth is he? Tommy Steele? And how many others among our best-loved celebrities are being played by sinister impostors? Soon after the death of HM the Queen Mother, I noticed that "Sir Paul" began to take on her appearance. What does it all mean? Is the impostor making a bid for the Royal status? Alone among columnists, I am often hit by the feeling that I really don't know what to believe any more. 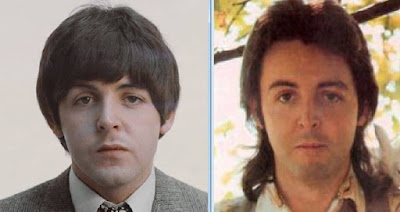 
11/7/04 Sunday Mercury 40
2004 WLNR 10485825
Sunday Mercury (Birmingham, UK)
Copyright © 2004 MGN Ltd.
November 7, 2004
Section: Features
Music: This man isn't the real Mac
He's mean, he's outspoken and he's ugly. He's Ugly Phil, the Kerrang! radio host with his rock'n'droll column.
UGLY PHIL
I LOVE a conspiracy theory as much as the next guy.
I knew they'd faked the Moon landing long before the movie Capricorn One came along. The fact that OJ Simpson played one of the astronauts only helped to cement my convictions.

But if you want to tread the path of rock'n'roll conspiracies, well, take a seat. How long have you got?
Type 'music conspiracies' into your internet search engineand you'll find some evidence that'll make you kick yourself for missing the obvious clues in the first place.Paul McCartney's dead for starters. Well, the original one anyway!
He was replaced by a lookalike lefthanded bass-player early on, and the rest of The Beatles were sworn to secrecy.
Spurred no doubt by John Lennon, the now Fab Three tried to spill the beans with enigmatic album covers.
Just look at the cover of Abbey Road. What's the number plate on the Volkswagen in the background?
It's 28, the age Paul would have been had he lived. And Paul's barefoot, of course.
Look at the cover of Sgt Pepper. All those dead celebrities on the cover, andPaulwith a hand raised above his head - in the Egyptian death sign!
And, hey, it explains why his music went from brilliant to bloody awful almost overnight...
Spooky or what? Bottom line here, people. If you're Paul McCartney, then you're living a lie...

Posted by Plastic Macca at 7:33 PM 3 comments: Links to this post