Ed Opperman interview with Tina Foster about Paul McCartney having been impostor replaced in 1966. Topics include doubles and impostor replacements, weaponized music, the drug agenda, and the NWO. (recorded Jan. 23, 2016). Audio file: https://www.spreaker.com/user/opperma...

Comment on CHIEDI CHI ERA QUELL BEATLE? / Ask Who Was the Beatle? 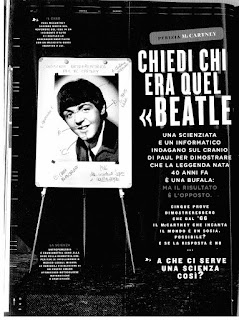 Gabriella Carlesi is an Italian forensic pathologist with a subspecialty in odontology (the study of teeth) [link to Wired article]. Her life's work involves identification of people through craniometry -- the scientific comparison of skull features. These scientific analyses have been carried out with Carlesi's partner, Francesco Gavazzeni, a computer scientist. Since the 1990s, this pair of forensic sleuths have used their dual expertise to work on a number of high profile forensic identification cases.

In 2008, Carlesi and Gavazzeni became interested in tackling the James Paul McCartney replacement conspiracy. They originally attempted to disprove the legend of Paul McCartney's replacement. However, the researchers discovered, much to their surprise, that they confirmed the replacement. After images of Paul McCartney, taken before as well as after late 1966, were compared, the professionals were shocked to discover that they simply did not match.

Their findings were published in the July 15, 2009 issue of WIRED ITALIA, the Italian edition of the U.S. magazine, WIRED. To ensure proper photographic comparison of Paul's face over time, the photos had to be re-sized to scale. The researchers chose to use the inter-pupillary distance to scale the facial features. After the photos were scaled to pupil distance, they were placed over each other for comparative visual examination. The photos taken before late 1966 did not match those taken after late 1966.

The analysis also found wildly bizarre characteristics of the ears -- this consistent with the well-known phenomenon of photographic tampering carried out on many of the photos dated before late 1966, which were found to have been altered to make the facial features of the replacement Paul appear more like those of the original Paul. Doctor Carlesi was most amazed with the differences in the shape of the hard palate, which is unalterable without significant plastic surgery. Any surgery that would alter the hard palate shape would have necessitated approximately a year or more of recovery time. The man known as Paul McCartney is not historically known to have undergone any significant cranial surgery and, for sure, was never shown to have been in a year-long post-operative recovery phase. Aside from that, there would have been no obvious reason for the original Paul to have had his hard palate surgically fractured and reset.

After the original DNA test was found to not be a match, Bettina Krischbin accused Paul McCartney of sending a substitute to donate his DNA for the test. Well, in essence, the Paul McCartney that showed up to submit a DNA sample WAS INDEED a substitute, but he was not sent by the real Paul, whose whereabouts to most of the world have been unknown since late August 1966 [see link].

It was also claimed by Bettina Krischbin (McCartney) that the signature produced by the Paul McCartney who showed up to submit the DNA sample was that of a right-handed individual, not of the TRUE LEFT HANDED PAUL [see link].

In 2006, the German authorities re-opened the legal case for Krischbin's (McCartney's) paternity claim. If Paul McCartney was ultimately proven to be the father of Bettina Krischbin, then Ms. Krischbin would have been due to receive 10% of McCartney's estate upon his death. Clearly, the Krischbin legal team did not understand at the time that the REAL PAUL McCARTNEY was not available for DNA submission. If it had, then the members of that legal team would have known that Bettina Krischbin had ZERO chance of ever proving that she was the love child of the real Paul McCartney.

Interestingly, on July 15, 2009 (the same date on which WIRED ITALIA released Carlesi's and Gavazzeni's data which proved that Sir Paul McCartney was not the original Paul McCartney), the replacement McCartney gave an outdoor musical performance in New York City, and then later that day, appeared on the David Letterman Show at the Ed Sullivan Theatre/Studio 50 at CBS Manhattan (where the ORIGINAL Beatles - including the GENUINE James Paul McCartney - performed for millions of people on American television back on February 9, 1964) [see link].

This lie-fest included the ridiculous lie that the replacement Paul told Letterman's audience about taking his shoes off for the Abbey Road album cover photo shoot "because it was hot." The last thing any human being would want to do when it is truly hot outside is to remove one's shoes, which would expose the feet to burning hot ground temperature.

The timing of this July 15, 2009 Manhattan performance/Letterman appearance seems suspicious for being planned on the same day as the release of the Wired Magazine article, perhaps to help provide a distraction for the mind-controlled robots of the world by diverting their attention from the facts of the case.

This would all be laughable, except for the fact that the replacement McCartney has been besmirching the personality of the original Paul McCartney, who was a soft spoken, laid back, really cool guy and a champion of the people (pushing for A 432 Hz musical tuning and planning to write a musical score for Mark Lane's movie about JFK, Rush to Judgment).