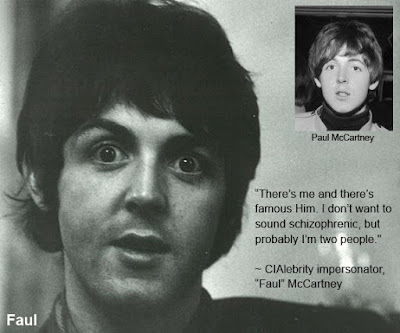 And the admissions keep on coming...

McCartney suffered a massive identity crisis as the band were splitting, a new biography claims

...An excerpt from the book, as published by The Sunday Times, reads: "Day by day, his (McCartney's) condition had been steadily worsening. His often sleepless nights were spent shaking with anxiety, while his days were characterised by heavy drinking and self-sedation with marijuana. For the first time in his life, he felt utterly worthless. This was an identity crisis in extremes ... when he did get out of bed, he would reach straight for the whisky and by three in the afternoon was usually out of it..."

Author of The Splitting Image: Exposing the Secret World of Doubles, Decoys, and Impostor-Replacements

Posted by Plastic Macca at 11:28 AM 2 comments: Links to this post