***ATTENTION: PIA IS A COINTELPRO OPERATION*** 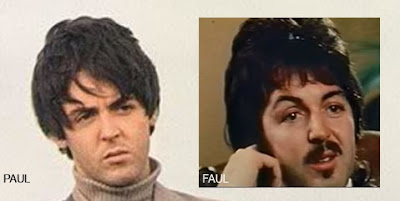 templer06 has just posted a very distasteful post on the Icke forum with my picture on it. Revealing a member's identity is a serious infraction of the forum rules. Templer is threatening me that he knows who I am, and I better shut up or else! This is a cowardly bully's attempt to try to intimidate me into not posting anymore. It will fail.

Some may have been upset by the post, but I see the fact that I am making these people angry - the ones trying to suppress the Truth about Paul McCartney - as a positive sign. I agree with Paul Joseph Watson that "The fact that the government is being forced to hire armies of trolls in an effort to silence the truth shows how worried they are about the effect we are having in waking up millions of people ..." The nasty attacks against me are proof that I am having an effect. PID is an issue now. It is in the public consciousness, and they don't like it one bit. Their threats will not dissuade me in the least. I can smell their desperation like blood in the air.

At any rate, I have demanded that the Icke forum ban him immediately, just as they did when Light_man posted my picture. Templer06 may even be Light_man with a different username. Who knows? I have copied Templer06's post, and I have sent a copy to the forum administrators. so that there will be a record in case he tries to modify it. [Edit: the post has been deleted & Templer06 has been prevented from posting further].

It seems to me that templer06 is a paid disinformation agent. The PIA attacks against me are mapped according to COINTELPRO operating procedures. They mock, disparage, ridicule, insult, bully, offend, harass, and systematically distort.

Some information on Psyops for the uninitiated:

The human terrain has proven hugely important in current conflicts and the capabilities required to influence an audience have seen major developments in recent years. The employment of private sector expertise and new media tools such as online social networking have opened up new opportunities for the IO [Information Operations] community, yet the challenges of developing a coherent and culturally astute message remain. Messages must also be coordinated in an often complex, coalition environment and the issue of Measurement of Effect still represents a significant obstacle to progress.

The Information Operations Europe conference series, now in its 8th year, is specifically designed for military staff engaged in influence activities to share key Lessons Learned from ongoing information campaigns, new concepts and policy updates and to understand how techniques for MoE are developing. It is the best attended and most international meeting of its kind in the world.

Those who manage to get close to the truth of these matters, despite the many obstacles in their path, face National covert campaigns to discredit and disrupt their research and reputations.

Let us see what Templer says about himself:

Biography
I am an enigma
Location
Wherever I am sent
Interests
Electronics, Photography, Music, Guns & Ammo
Occupation
If I tell you I will have to kill you...

What information can be gleaned from the username Agent Templer chose to represent himself? A very interesting connection to Germany and Nazis is revealed. For those who have been following the blog, you will know that someone in Berlin tried to hack my Icke account in April 2010 (IP address - 88.74.39.160 - Berlin). [See post]

Templers are members of the Temple Society (German: Tempelgesellschaft), a German Protestant sect with roots in the Pietist movement of the Lutheran Church. The Templers were expelled from the church in 1858 because of their millennial beliefs. Their aim was to realize the apocalyptic visions of the prophets of Israel in the Holy Land...

During the 1930s, when the Nazi party rose to power, Nazi youth movements were established in the Templer colonies. Some Templers enlisted in the German army. By 1938, 17% of the Templers in Palestine were members of the Nazi party. According to historian Yossi Ben-Artzi, "The members of the younger generation to some extent broke away from naive religious belief, and were more receptive to the Nazi German nationalism. The older ones tried to fight it."...

So, if anyone still thinks there is "nothing" to PID, then the actions of the disinfo agents against PID-Truthers alone should be enough to convince you that this is a nasty information war, and they are not afraid to do whatever it takes to silence their opponents. It is apparent that they are trying to intimidate PID-Truthers into silence, especially me (won't work). It is because we are exposing the Truth about what happened to Paul McCartney. The attacks are counter-productive to their cause, because it actually convinces some people that there is something to PID. This was posted by a very good PID Truther called Switching Yard at ATS:

The only reason I decided to study the PID topic is that it was apparent to me that there are some kind of paid agents employed to counterattack the PID arguments.

If I had not seen any vicious attacks on PID postings, I would have never been interested.

Since I did see that, it convinced me that there is something seriously amiss in the popular and commonly accepted history of The Beatles. After doing some research on my own and seeing all the angles and theories posted by PID researchers, I have concluded that something is terribly wrong with the accepted version of history.

The trolls don't do PIA any good. Just the reverse. The trolls convince people like me, a lifetime Beatles fan, that we haven't been told the truth over the years...

Some people are aware of the threats against me and are in a position to take action, should anything untoward happen. Let that be a warning to those individuals.