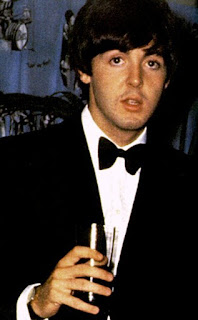 It is Paul McCartney's 74th birthday today (or would have been). This is just a quick update on PID progress. I just did a roundtable discussion on PID with Jim Fetzer and Nicholas Kollerstrum. It was hosted by Jason Lindgren. (Secrets of Saturn, Episode 28). Although we did not agree on all of the particulars, we all agreed Paul was dead.

So much progress has been made in PID research that even once skeptical critics are now seeing the truth. Paul is being rediscovered and recognized for his important contributions. The veil is lifting. More and more people are seeing through the deception. It is close to the tipping point now. Pretty soon, a certain percentage of people will be reached, and then suddenly, everyone will be able to see that Paul was replaced. (100 Monkeys Effect). Until then, we will just keep slogging away.

Add Tina as a friend on MeWe
Posted by Plastic Macca at 1:30 PM