Is it McCartney or is it an imposter? By DAVID BRINN 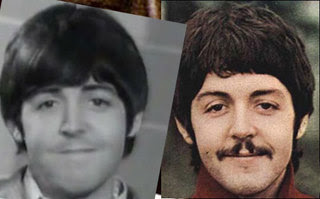 Is it McCartney or is it an imposter?

Some 40,000 fans are expected to pack Yarkon Park Thursday night to see Paul McCartney perform his classic songs. But will it really be the former Beatle taking the stage, or will it be Billy Shears? Or maybe William Campbell?

Some 40 years after first surfacing, the legend that the former Beatle died in a fiery 1966 car accident and was subsequently replaced by a look-alike, sound-alike imposter still attracts considerable attention and scrutiny. Books, research articles, Web sites, university lectures and presentations have all focused on the plethora of clues that weave together one of the more outlandish but mystifying conspiracy theories that evolved from the 1960s.

"It was the end of the '60s. You have to remember this was against the backdrop of the assassinations of Martin Luther King [Jr.] and Bobby Kennedy, as well as the Vietnam War and the Pentagon Papers. So this sounded like the perfect conspiracy cover-up. People stayed up all night talking about it, and some were actually quite scared."

lazier spoke to The Jerusalem Post from Toronto, where he was a featured speaker at a Beatles convention, along with former John Lennon girlfriend May Pang and ex-Ringo Starr paramour Nancy Andrews.

Glazier initially rose to prominence in the Beatles scholarly world in 1979 by publishing a 30-page comprehensive research article on the issue for the premier Beatles fan magazine, Strawberry Fields Forever, which attracted the attention of Beatles convention organizers.

Since then, Glazier has been a mainstay on the convention and college campus circuit, both in the US and Europe. But he's not just a conspiracy theorist - he's also a bona fide Beatles expert, and has been hired by the Delaware school system to present lectures to students on the importance of The Fab Four in popular culture.

For those too young - or too old - to remember the "Paul is dead" theory, it goes something like this: McCartney perished in a 1966 London car crash, but The Beatles, not wanting to make it public, used their clout to keep the tragedy secret. They hired the winner of a McCartney look-alike contest to take his place in the band, a lucky guy with the name of either William Shears Campbell, Billy Shears (the name of the fictitious leader of Sgt. Pepper's Lonely Hearts Club Band) or William Sheppard.

What gave fuel to the fire were a slew of supposed hints to the switcheroo that fans gleaned from Beatles' lyrics, photos and album covers, first exposed in a college newspaper article and then picked up by a Detroit radio station, before breaking worldwide with extensive coverage on all major TV and print media.
"I think you have to pay tribute to the cover of Abbey Road for starting it all," said Glazier. "The four Beatles are walking across the street, in what looks like could be a funeral procession. John's in white, the religious leader, Ringo's in a tux - the funeral director, George is in work jeans, the grave digger. And Paul, he's barefoot and out of the step with the others. People interpreted that as alluding to the practice of burying people barefoot.

"In addition, he's holding a cigarette in his right hand, and he was famous for being a left-handed bass player, a sign that this Paul is an imposter. And finally, there's the license plate on the Volkswagen in the background - which reads LMW 28-IF, which was interpreted to mean 'Linda McCartney widow, and Paul would have been 28 'if' he hadn't died in 1966."

From there, fans went backwards to albums like 1967's Sgt. Pepper's Lonely Hearts Club Band, which they claim houses a dozen more clues within the photo imagery on the front and back covers - including the back cover photo of the group with three of the Beatles facing forward and McCartney turned backward, with the words "Without you" printed next to his head from the song title "Within You Without You."

The cover of 1968's The Magical Tour shows three Beatles sporting red roses on their lapels, while McCartney's is black; and of course, Lennon supposedly sings "I buried Paul" at the end of "Strawberry Fields Forever."

And the list goes on - seemingly random details that, when combined together, might result in something more meaningful, according to Glazier.

"It certainly wasn't serendipity. Even if somebody could explain away one or two of the clues, how can you explain 70 of them? There were no coincidences when it came to The Beatles - everything was a precise, conscious decision, from the music to the album art," said Glazier, who discusses the phenomenon with a coyness of someone who loves keeping the legend alive.

He pointed to other chronological occurrences which he says provide additional ammunition of an upheaval in the Beatles world, as caused by McCartney's death.

"During 1967, when Sgt. Pepper's came out, The Beatles stopped performing live because the new Paul wasn't up to playing in public. And by 1970, the band had conveniently broken up and no longer had to deal with the questions. And some would say that since The Beatles years, the quality of Paul's songwriting is not what it once was. But that's a judgment call," said Glazier.

But according to Israeli Beatles historian Yarden Uriel, Hebrew author of two books on the group, the "Paul is dead" theorists are simply forgetting the main argument against acceptance of an imposter McCartney - human nature.
"Just because they were The Beatles, it doesn't mean that they don't behave in the same way that real people do, and that they interact with people in the same way as we do," said Uriel.

"Let's assume for a minute that Paul really did die and was replaced by a look-alike. The Beatles were very strong people individually - John, George and even Ringo.

"Do you think they would let this new guy come in and dominate the band, as Paul did on Sgt. Pepper's and all the way to Abbey Road and Let it Be?It's human nature that he would be relegated to the back and Lennon would take over the band. It's just not plausible. But people want to believe it because they like conspiracies. It's a great sociological study."

For Glazier, though, it's been something more - a 40-year obsession. He won't profess whether he thinks McCartney is really dead. "I don't really know if Paul is dead or not. I'm too busy looking for clues."

But in addition to the popular conclusions that the clues were a hoax instigated by The Beatles either as a elaborate joke or to boost album sales, both of which have been denied by all four Beatles in the past, Glazier does offer some additional reasons as to why The Beatles may have initiated an intricate trail of "Paul is dead" clues.

"One of the theories is that the clues were introduced by The Beatles as a kind of tribute to their original bass player Stu Sutcliffe, who left them before they became popular," he said.

Another theory says that Lennon's love of wordplay and studio editing led to some clues in later albums, but that after cult leader Charles Manson attributed his killing spree in part to "hidden messages" in the song "Helter Skelter," the band members chose not to reveal the joke.

And then, going to the extreme, there are conspiracies that tie in everything from a Faustian deal with Satan to a Rosemary's Baby-Mia Farrow-Roman Polansky-Sharon Tate-Manson connection.

Having visited Israel eight times, and being instrumental in the establishment of the John Lennon Peace Forest in the Galilee, Glazier is overjoyed that a Beatle is finally appearing in Israel. "Finally, the people of Israel will get to see the person who is allegedly Paul. And make sure you write 'he said that with a smile,'" said Glazier.

I think this is a wonderful thing for Israel, and for Paul. I've always found a sophisticated musical audience there and Paul, being the most successful musician in the world, should be playing there."

Glazier was one of the 250,000 fans who enjoyed McCartney's performance in July for Quebec's 400th anniversary and he said the Tel Aviv crowd would not be disappointed.

"It was an absolutely dynamic concert. I couldn't believe that somebody who's supposed to be 66 has such energy. And I also couldn't believe the quality of the sound, no matter where you stood, and the crystal clear big screens. I never saw so much detail given to those elements," said Glazier.

However, he can't help concluding by introducing another shadow of a doubt.
"Whoever this person is, he can certainly play well. But I still think there's something missing. Is that voice singing 'Yesterday' the same voice that sang it in 1965? You decide."