Paul is Dead Clue: Isaac Asimov's “Five and Five and One”

Back in 1974, Faul approached Isaac Asimov about making a movie about a band that was being impersonated by ET's. Ironically, the Faul was going to play one of the impersonators. Here is what wiki had to say about the movie that never happened:


Paul (Faul) McCartney approached Isaac Asimov in December 1974 with a possible idea for a sci-fi related project. He had just finished Wings' Venus and Mars album.

In December 1974, former Beatle Paul McCartney approached Asimov and asked him if he could write the screenplay for a science-fiction movie musical. McCartney had a vague idea for the plot and a small scrap of dialogue; he wished to make a film about a rock band whose members discover they are being impersonated by a group of extraterrestrials. The band and their impostors would likely be played by McCartney's group Wings, then at the height of their career. Intrigued by the idea, although he was not generally a fan of rock music, Asimov quickly produced a "treatment" or brief outline of the story. He adhered to McCartney's overall idea, producing a story he felt to be moving and dramatic. However, he did not make use of McCartney's brief scrap of dialogue, and probably as a consequence, McCartney rejected the story. The treatment now exists only in the Boston University archives.

Below is an article that talks more about what would have been a pretty major PID clue movie. 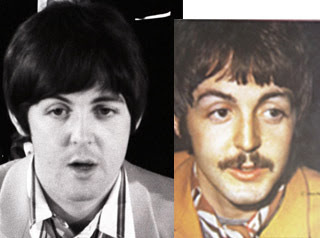 
The Greatest Movie Never Made: Isaac Asimov’s “Five and Five and One”

“Five and Five and One” is a science fiction rock opera suggested to Isaac Asimov by Paul McCartney, but as Asimov noted on the first page of his treatment, “nothing ever came of it because McCartney couldn’t recognize good stuff.”

Robotic Revolutions recently had the opportunity to view the Isaac Asimov Collection at the Howard Gotlieb Archival Research Center at Boston University, where we unearthed Asimov’s original treatment.

“Five and Five and One” is the story of six extra-terrestrial, parasitic, energy beings that crash land their space ship on Earth and are forced to take drastic measures to survive: copying the identity of a rock band, with the goal of brainwashing the entire world.

Arriving on Earth, the ETs have the appearance of lizard-men and communicate through thought-waves, but we soon learn the lizard-men are simply host bodies for a race of wraith-like energy beings that must subjugate other species in order to live.

Hiding their space ship in a cave and leaving behind their lizard-like shells, the cloudy group of six takes over a herd of cattle. The intelligence of the aliens suffers in their cattle form, so they begin the search for a more suitable host: man.

The body snatchers come upon a man and woman in a parked car, listening to music and kissing. The kissing confuses the aliens, as they reproduce asexually through fission and have no understanding of love. Even as they are unable to break the will of the humans, they notice the music affecting them.

The energy beings believe using music may allow them to mentally dominate humanity - to survive and reproduce. Taking the form of eagles, the aliens search the world for the music they need - from exotic Chinese music to modern symphonies and childish jingles, they cannot find a suitable sound.

Finally, the aliens settle on the British backwoods, where they find “the Group,” played by Paul McCartney’s band, Wings. The body snatchers detect strong emotions in the listeners of “the Group,” as well as affection between sexes, which confuses them again.

In a desperate gambit, the ETs expend almost all of their energy to copy the form of “the Group” and through the use of an Emotion-concentrator become “the Super-Group,” able to produce music with even more power and intensity than their predecessors.

The six beings become the five members of the band, accompanied by Joe, an earnest and clumsy, yet lovable manager. “The Super-Group” completely rocks out with the help of the Emotion-Concentrator, creating sophisticated and dangerous music.

Turning into eagles again, the aliens fly to the United States to stage their take over with the assistance of high technology and pop culture. However, once “the Super-Group” begins to play before packed audiences and sold-out crowds they begin to lose control, making “boner” mistakes and social gaffes during their shows.

Joe realizes the beings are dependent on the proximity of “the Group,” so he flies back to Britain and shows the original band US fan magazines and clippings of “the Super-Group” and their runaway success.

Puzzled and indignant, “the Group” struggles to defend their identities. They fly to the United States with Joe, who must constantly push them forward, yet keep them a step away from his alien race to maintain the superiority of “the Super-Group.”

During his travels with “the Group” across the United States, Joe begins to take interest in the only female member of the band.

Once “the Group” is in the US, “the Super-Group” plays with a much surer touch. Yet as suddenly as “the Super-Group” gains their powers they begin to diminish - even with the Emotion-concentrator at full power.

Joe, through his interaction with the girl, realizes “the Group” is regaining their power through their capacity to love. His alien race knows nothing of the physical, mental, or emotional affection of sexual attraction, so “the Super-Group” is unable to express it in their music.
His species is revolved by Joe’s explanation, but it is revealed to be true, as they play a love song full of disgust, while McCartney’s band plays a love song with romance and delight. Undeterred, “the Super-Group” believes they are mere days from taking over the Earth, but Joe tells them they will never succeed without love.

Without Joe to keep “the Group” at bay, they stumble upon “the Super-Group” and the stage is set for a final showdown with original and imitation in direct conflict!

Face to face with their doppelgangers, “the Group” plays better than ever, filled with indignation towards the aliens and love for each other. “The Super-Group” is repulsed by the love, which drives their skill even further into the ground.

Realizing victory is close, a note of triumph enters the music of “the Group.” Joe feels it as well, he knows his race cannot win and he no longer wants them to succeed because he is beginning to understand his love for the girl.

The five members of “the Super-Group” melt and disintegrate, wraith-like and formless, disappearing into the distance. However, Joe survives, as a result of experiencing love. He wants the girl, not as a host body, but as a partner, a fusion of equals - a share of her and a share of himself.

The girl understands and they approach… Joe dissolves his human form and melts into the girl, where he will remain as long as she lives.

The final song, in Asimov’s words, “must express the victory of love and the escape of mankind, not only from domination, but from isolation as well. There has been a union of intelligences for the first time and the birth of a combined being greater than either separate one, and the coming of a race that will truly inherit the Universe.”


Above article now available at http://launch.groups.yahoo.com/group/wonderwallemporium/message/197

Special thanks to Andrew Johnson from Check the Evidence for sending this information, which in turn was sent to him by "Neil." My interview with Andrew is available here: Was Paul McCartney "Replaced" By a "Double" in 1966? ( or audio only)

Thank you to everyone who contributes to PID research!