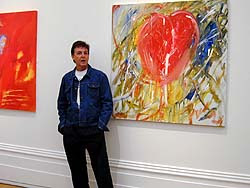 New York's top art critics are refuelling the rock 'n' roll myth that Paul McCartney died over three decades ago - after taking a rare close-up view of his paintings.

Top Big Apple celebrity art expert BAIRD JONES staged a one-night exhibition of John Lennon and McCartney art from his own personal collection at New York club Deep earlier this month (15SEP05) and was left stunned by the reactions of his "austere" friends.

A fan of McCartney's art for years, Jones admits it took the opinions of his critical pals to make him realise that the 'Paul is dead' rumours that started in the late 1960s could be true.

He explains, "There were lots of questions about why he (McCartney) predominantly uses the colour red in ways one would not. It's the colour of blood and death. 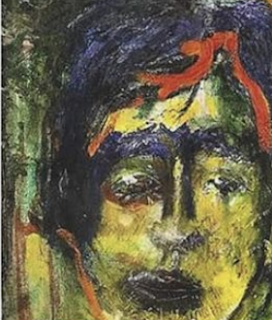 Thanks to HH for sending this image of a Faul painting that seems to show the real Paul with a head injury.

"The critics were asking questions like, 'Why is there so much red in the garden (painting) and on the beach (painting)? It's macabre.' Call it art psychoanalysis, but the 'Paul is dead' rumour has started to spread.

"These were highbrow, austere people who take their art seriously. Some had never really had the chance to see McCartney's art up close."

Jones now claims there are major clues in McCartney's art that suggest the rocker might not be what he seems to be.

He explains, "It's one more sign that this man is communicating something. Red has been a dominant colour of his for some time.

Posted by Plastic Macca at 9:43 PM