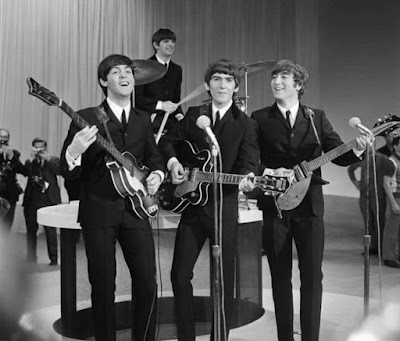 I would like to thank Ab Irato of Radio Ab Irato for sending me the following link.


Theodor W. Adorno was the brains behind the 'Beatles' as he held the rights to the music and eventually his estate sold those rights to Michael Jackson. Adorno a classical musician wrote their music and it was all filtered down through Paul who could not read a note of music by the way... Oh and as an aside, Paul ended up being Knighted, and you don't get Knighted unless you have done as you were told and made your masters proud...

The disinformation that philosopher Theodor Adorno of the Frankfurt School  wrote all the Beatles' music has been in circulation for years. This theory rests on the claims of one person - Dr. John Coleman, which he made in his book, The Committee of 300, with no supporting evidence. Dr. Coleman was a former British Secret Service agent, and intelligence officers have been known to spread disinfo if it suits the agenda.

I have a number of problems with the above claim. For starters, is it logical to think that a dusty, old professor would be so hip and cool as to write hit songs for the hot new bands of the 60's, while at the same, publishing his own writings and teaching classes? And if the same person were writing all of the Beatles songs, why did the musical quality decline (or at least change) after Paul McCartney died and was replaced? If "Teddy Boy" Adorno had been writing all of the music, the quality should have remained consistent. "Obladi [oh bloody] Oblada" is no "Eleanor Rigby!" Mal Evans maintained that he helped Faul write songs for "Sgt. Pepper." If Adorno had been the mastermind, why would Faul need help from the roadie?

The possibility that a ghostwriter wrote "Beatles" songs after the replacement(s) is likely. "Helter Skelter" may have been written and recorded by Charles Manson at Apple Records (B side was "Cease to Exist"). The song may have been stolen by Faul and put on the White Album. In some instances, it appears that the later Beatles/Featles' and solo songs were the Fab Fours' songs re-worked. For example, Faul's "Another Day" is just Another "Yesterday," famously penned by Paul McCartney. At any rate, just because someone owns the rights to songs does not mean that s/he wrote the songs. This is obvious, as the song rights were sold to Michael Jackson.

It is claimed that Paul could not read or write music, but he was actually learning. Regardless, many musicians do not know how to read music. It is not necessary to read or write music to compose melodies. It is possible to sit down with an instrument and find chord progressions or pick out melodies. Wolfgang Amadeus Mozart wrote entire compositions in his head. Paul knew chords and could write down tabs. The lack of formal training does not negate musical talent. Formal training may even stifle creative genius. At any rate, someone else could have transcribed the music for Lennon/McCartney songs upon publication.

The claim that "Paul ended up being Knighted" is erroneous. James Paul McCartney was not knighted. Paul was replaced in 1966, which has been proven by forensic science. Sir Faul was the one knighted. In this author's opinion, Sir(pent) Faul is very much a team-player for the powers that be (Illuminati).

Here are some thoughts by another author who has considered this issue:

Beatlemania, Mind Control and the New Objectivity by Zabode
http://www.hiddenmysteries.org/themagazine/vol12/articles/dr-boogie.shtml


... Then there's this whole matter of some Tavistockian by the name of Theo Adorno (actually a German professor of philosophy who wrote about music, though Dr. [John] C[oleman] never tells us that) having written all the Beatles' songs (both music and lyrics), which they then simply had to memorize like obedient little drones. This I'm not buying for two reasons. First, Dr. C. supplies exactly zero evidence to back up this contention (although it did come as something of a shock reading in the Interviews [p. 142] that not one of the Beatles could read or write music, though Margie has assured me this is not uncommon amongst musicians); second, the last almost-third of the Interviews involves David Sheff rattling off Beatles' tunes and Lennon firing back who originated them, who contributed and whatever background he could recall. Dr. Coleman's ranting aside, Lennon does a convincing job of accounting for scores of Beatles' songs, hits as well as more obscure tracks, and nowhere, trust me, does Theo Adorno come up. In fact, beyond Paul and "me" very few people get mentioned at all. Okay, one might counter, perhaps Lennon had been programmed (given screen memories) to account for every Beatles' song. It never once comes across that way in the Interviews -- and I was on the lookout, believe me! -- but who's to say...

Co-opted they may have been; one thing, however, I want to stress: The talent, the wit, the joie de vivre that typified the Beatles and their music I believe were genuine. Dr. Coleman's notion of a sixty-year-old philosophy professor -- from Germany no less! -- writing "Strawberry Fields" and "Penny Lane," the stuff of John Lennon's childhood, is simply absurd. Then how is it I can still recommend Conspirators' Hierarchy? The research in this book on the world narcotics trade and on the existence of the groups advancing the Agenda of the "One World Order" (as Dr. C. prefers to call it) is thorough and credible. It's quite feasible in light of his biases that the good doctor was himself disinformed in regard to the Beatles. Such disinformation would serve to discredit his book in general and also to demoralize his readers by suggesting that the GSE are 100% behind all great creative endeavors, the implication being that we, the human herd, are unimaginative clods from whose ranks nothing exceptional springs lest it be nurtured by evil (after all, the Sumerian word for "human being" -- according to R.A. Boulay, author of Flying Serpents and Dragons: The Story of Man's Reptilian Past -- is LULU or "big sheep"). This, however, is unadulterated bullsh*t. Creative expression is a human trait, evident in everything we are. The Agenda must place limits on this creative potential, including our awareness of even having it, because this is our strength. The GSE have adroitly kept us pitted against each other till we've truly come to believe the lie that human nature is inherently destructive...

Why would someone spread disinformation about Paul's supposed lack of musical talent? In my opinion, such hit pieces are aimed at belittling the Beatles and making them seem unimportant. If people believe Paul was a fraud, then why would they be interested in researching his murder and impostor-replacement? The fact is that Paul was a gifted musician who wrote hit after hit, even under goofy names (Bernard Webb) and for other bands such as Peter & Gordon. His songs even inspired other hit songs. For example, the Beatles' number one hit, "Paperback Writer," inspired the number one hit "Last Train to Clarksville" (recorded by the Monkees). It was the Beatles' inspired musical genius that got them to the toppermost of the poppermost.  Faul, on the other hand, did not achieve as much success - and not for lack of trying. He has been at it since 1967, and has never equaled Paul's success. As mentioned above, he needed his roadie to help him write songs. It should seem obvious that different people were writing Beatles' and solo songs. Therefore, they could not ALL have been written by Theodor Adorno.

At about 1:24:00, Dr. Hans Utter agrees with me that Theodor Adorno did not write Beatles' songs...


P.S. Today would have been James Paul McCartney's 71st birthday.

Join the discussion: Paul is Dead: Miss Him forum