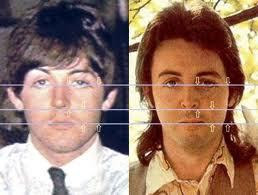 Tina Foster is an attorney practicing in Seattle and has researched the area of doubles and imposter-replacements, focusing on Paul McCartney, since 2008. She has examined how they are used in psy-ops by intelligence, military, and the entertainment industry.  Some of her research is posted at Plastic Macca - Paul is Dead:plasticmacca.blogspot.com

In the world of truth seeking, it doesn’t get much bigger than this topic and it is extremely difficult to separate truth from fiction, rumour and misdirection. But what does it say about us, society that we have allowed some very unusual and suspicious behaviour to go unchallenged for so many years.
Not surprisingly It is very difficult for many people to believe that Paul was replaced, none more so that in UK where Paul is recognized as UK’s number one son.

In order to understand how a switch could have successfully taken place and the rouse carried out for over forty years we have to look at the history of background information on doubles and impostor-replacements. We readily accept for example that Churchill, Hitler, Stalin all had doubles but we have difficulty in accepting celebrity imposters, why?

So how and when did the rumour begin, there have been many theories, some so blatantly inaccurate that it is reasonable to assume that this is the “firms” disinfo service swinging into action and or possibly the work of shills, the theory that Paul died in a car crash is just one example and we show that circumstances surrounding this event makes it pretty much implausible.

Why was Paul replaced? Why did the music of The Beatles change so dramatically from the upbeat fun songs about love, peace and harmony, to some very strange and dark music with cult messages in both song and cover albums? Why did John Lennon go to so much trouble to back mask?  And what of the messages analyzed in reverse speech?


And what of the physical evidence, facts are facts and the truth is the truth, and if we disregard all the theories, supposition and circumstantial evidence including the law of probability, Francesco Gavazzeni (information technology – computer scientist) and Gabriella Carlesi (expert in anatomy & craniometrics) have proved that Paul had been replaced in 1966.
Beatle Paul is dead (PID) Separating fact from fiction with guest Tina Foster [Listen to interview with Michael Cavallis from Vitalis News - July 26, 2013]