"The Splitting Image" by Tina Foster: Supplemental Images for Book 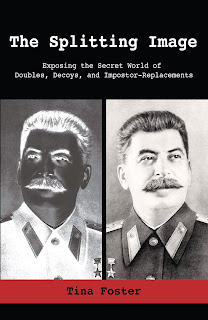 
Description
Psychological operations involving doubles are explored in this book. Politicians, heads of state, and other public figures routinely use doubles for a variety of clandestine purposes. Some are for security, while others serve more nefarious objectives. Political agendas can be promoted through the use of controlled doubles, for instance. Psy-ops using doubles are facilitated by means of technology, but technology can also be used to expose an impostor. Examples of historical doubles are discussed to illustrate certain tactical uses of lookalikes. (See below for supplemental images).

Reader Reviews
Tina Foster has done a thorough and engaging job of showing - with citations throughout - how the Establishment has routinely used doubles and stand-ins - not just for politicians and world leaders, but for celebrities and anyone else in the public eye. Couple this with the manipulation of photographic, video and sound technology, and the potential for coercing large numbers of people to believe the most outrageous of lies is enormous. This information reminds us of how vigilant we need to be to avoid being duped, and of how important it is to have our conscious minds engaged, rather than being sleepwalked by our subconscious.

~ Mark Devlin, author of Musical Truth: Exposing the mind-control manipulations of the corporate music industry ... and how to take back our power

I first came across Tina Foster when I was sent to a link to her research blog. It was sent to me by a friend who had been studying the evidence that Paul McCartney had been “replaced” by a doppelganger in 1966. I had heard of this idea quite a few years ago, but Tina’s blog contained a compelling collection of evidence, which is definitely worthy of study. After studying the evidence she had collected for some time, I agreed with Tina that McCartney was indeed replaced some time in 1966. I even made a posting about this on my website. So, this was one of the first cases (not discussed in this book, however) which showed me that a person can have a double – a twin – which can be passed off in public as being the original.

In “The Splitting Image,” Tina goes through various examples of where doubles seem to have been used, mainly for political reasons, and how this has been achieved. The main cases that are studied are Josef Stalin, Lee Harvey Oswald and Saddam Hussein. Tina has compiled a comprehensive list of references showing that each of these historical figures seem to have had doubles. (The reasons for having doubles are also discussed.) Other examples are also worth knowing about – such as Winston Churchill and General Montgomery. Aspects of how doubles are created and employed are also discussed. Tina admits that some of the evidence is anecdotal... However, certain accounts are very well documented. The references make up approximately half of the text of this book, so the reader can check these if they so wish!

Overall, it is an interesting and fairly compelling assemblage, which helps to strengthen the reader’s awareness of the way that doubles can be used as yet another tool of deception, to further the aims and agenda of those running the planet.

Tina Foster has given us a very good book [The Splitting Image]: clearly written, well-organized and on a topic of increasing importance. She discusses many examples, including Joseph Stalin, General Bernard Montgomery, Saddam Hussein and Kim Jong II...

Excellent, well documented and detailed. The Splitting Image explores the methods and extent of the use of doubles by powerful leaders to achieve their goals and cement their power. The book gives compelling examples of controversial uses of doubles in some of history's most important events. Well written and well documented, this book sheds light on some perplexing anomalies in recent world events.

Things are not always what they seem and The Splitting Image offers some intriguing answers to why that is.

After reading this book, you may never look at your world leaders the same way again.

I finished reading this book last night. I read it in one sitting. I liked it very much. I found the subject fascinating. I hope Miss Foster writes another book soon. I would definitely purchase it. I recommend this book to anyone who wants to know whats really going on behind the scenes!

Excellently written and extensively researched. An indispensable must-read for anyone interested in the use of replacements of some of the major players in history. I read this in one sitting. I couldn't put it down.

Another informative book by Tina Foster. As having been aware of Ms. Foster's work in general, I was not let down here. Very well researched, plus this book is not pendatic or hard to get thru. The most revealing part was the info I learned about Putin, Jimmy Carter, + Walter Mondale. Wow.. but Lee H. Oswald was VERY interesting too! Readable, great value - go get it.

It was a great read and it didn't get too controversial which is hard to do in this age of replaciaments.

Blew my mind! We've been doing this a long time so proof is there! Great work! Cant wait for your next book!

About the Author
Tina Foster has been researching the history of doubles in intelligence psychological operations since 2008. Tina has published many related articles on her popular blog, Plastic Macca. She has also been a guest on numerous radio shows, and is considered to be an expert in the field.

Supplemental Material
The following images are provided as a supplement to the book.

Posted by Plastic Macca at 3:31 PM