Faulse Memories: An Exposé of "The Memoirs of Billy Shears"

The fictional book, The Memoirs of Billy Shears, has received a lot of attention from Paul is Dead (PID) enthusiasts. Originally published in 2009, it is a tongue-in-cheek “autobiography” of “William Shepherd” - the person playing the part of Paul McCartney. in the book, William supposedly confides in the reader about how Paul died in a car accident in 1966, and how he was picked to replace him. He explains the myriad PID clues that have been discussed over the years. He also makes claims that were taken from other sources and/or can be proven to be patently false.

Ordinarily, we would not spend time discrediting a fictional story. However, we feel it is necessary in this case, because some people have attached an inordinate amount of credibility to it. This fictional book, which was never a serious research project, threatens to become the “PID Bible,” defining “what really happened.” Even worse, it casts the criminal impostor in a favorable light at the expense of the real Paul. Some people need to be disabused of the notion that Memoirs is a source of authoritative information on PID.

This article sets out to expose just some of the inconsistencies and inaccuracies in the book as it relates to the Beatles writing their own music. It is hoped that the reader will conclude that Memoirs is just good fiction and nothing more.

We realize this information may cause great consternation from those who have invested much belief in this book.

Oh, Yes It Is the Beatles' Own Music 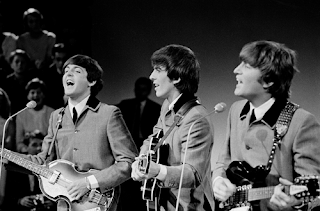 A concerted effort to discredit The Beatles has been made by some who claim that German philosopher, Theodor Adorno of the Frankfurt School, wrote all of their music.  Dr. John Coleman, a former British Secret Service agent, made the baseless claim in his book, The Committee of 300.  He “supplies exactly zero evidence to back up this contention.”  Many find this claim to be ludicrous, including musicologist, Dr. Hans Utter.


Tonny Nowhere Man's video that accompanies this article can be found HERE.

Prior to the 1960s, music publishers were known as "song pluggers." Their job was to persuade singers to record tunes written by songwriters they represented. However, the business changed with artists such as Chuck Berry and Buddy Holly, who wrote and recorded their own music.

Although the Beatles did cover some songs by other artists, such as “Words of Love” by Buddy Holly, “Anna” by Arthur Alexander and “Money” by Janie Bradford and Berry Gordy Jr.,  Paul McCartney, John Lennon, and George Harrison did write and perform their own songs.  Lennon explained, “Paul and I do most of the writing. George has written a few. Ringo hasn't, because it's hard to write something on the drums, isn't it.”  In their first radio interview (October 28, 1962), the lads made it clear how the song-writing was done:

MALCOLM: You composed 'P.S. I Love You' and 'Love Me Do' yourself, didn't you? Who does the composing between you?
PAUL: Well, it's John and I. We write the songs between us. It's, you know... We've sort of signed contracts and things to say, that now if we...
JOHN: It's equal shares.
PAUL: Yeah, equal shares and royalties and things, so that really we just both write most of the stuff. George did write this instrumental, as we say. But mainly it's John and I. We've written over about a hundred songs but we don't use half of them, you know.

When they were first signed, their producer, George Martin, thought “Love Me Do” and “P.S. I Love You” were the only commercially viable Lennon/McCartney tunes. Needing to release a single, Martin had the band learn the more likely hit, Mitch Murray’s “How Do You Do It.” However, the Beatles balked. They wanted to record their own songs, and to succeed or fail on their own terms. Gerry and the Pacemakers went on to have a hit with “How Do You Do It.” 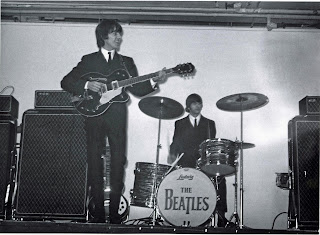 The Beatles recorded their original song, “Please Please Me,” in November 1962. The song was an astonishing leap forward in terms of song craft and propelled them to the toppermost of the poppermost. “All of their subsequent albums and singles would show remarkable artistic progression (though never at the expense of a damn catchy tune).”

More evidence was provided by Walter Shenson, the producer of the movies, A Hard Day's Night and Help!, that The Beatles wrote their own songs: He personally saw matchbook covers upon which John and Paul had scribbled the lyrics for “A Hard Day’s Night” – a song Shenson thought “had the right beat and the arrangement was brilliant.”

Naysayers latch onto the fact that none of The Beatles could read or write music to bolster their argument that the Fab Four did not write their own songs. “When it came to official transcriptions of their music, The Beatles could provide input if necessary, but the transcribing was left to others. When classical/professional musicians were employed during recording sessions, The Beatles would often sing the melodies and George Martin would transcribe them into sheet music.” However. Paul did learn to read and write music – or at least, he was in the process.  In 1966, he was taking music lessons once a week from a composer.  Paul said, “I felt like an old person sitting there saying, 'I wish I’d learned to read music.’ So I started to learn.” 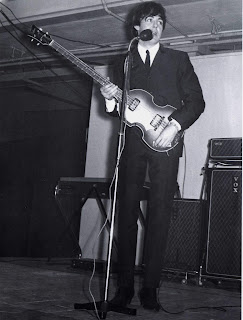 The Memoirs of Billy Shears claims Paul wrote “Yesterday” (1965) in a dream (a claim actually made by Faul), but Paul explained the creative process he went through while writing it, a song that was his alone. (Lennon corroborated this fact in a 1980 Playboy interview by saying that “Yesterday” was entirely Paul’s and that he had nothing to do with it.) In a May 1965 interview, Paul recalled “mulling over the tune ‘Yesterday,’ and suddenly getting these little one-word openings to the verse. I started to develop the idea… da-da da, yes-ter-day, sud-den-ly, fun-il-ly, mer-il-ly and Yes-ter-day, that’s good. All my troubles seemed so far away. It’s easy to rhyme those a’s: say, nay, today, away, play, stay, there’s a lot of rhymes and those fall in quite easily, so I gradually pieced it together from that journey. Sud-den-ly, and ‘b’ again, another easy rhyme: e, me, tree, flea, we, and I had the basis of it.”

“Yesterday” was not the only song Paul penned by himself. Reflecting on a visit with George Harrison in 1971, guitarist Peter Frampton said, “I’d put on ‘Paperback Writer’ and say, ‘I love the guitar on that,’ and he’d say, ‘Oh, that’s Paul.’ I put all these other Beatles tracks on: ‘Oh, that’s Paul.’”  Lennon confirmed that “Paperback Writer” (1966) was Paul's song.

According to George Harrison, the Grammy Award winning song, “Eleanor Rigby,” was also “Paul on his own.” The song was probably inspired by a tombstone with the name “Eleanor Rigby” on it, which is located in the cemetery at St. Peter’s Parish Church in Liverpool, where Paul and John Lennon used to sunbathe.  This is a song with a personal connection about which Adorno would have no idea.

Another problem with the claim that they did not write their own songs is the fact that “Lennon and McCartney... frequently [gave] cast-off tracks to friends like Gerry and the Pacemakers (‘Do You Want to Know a Secret’), Billy J. Kramer and the Dakotas (‘Bad to Me’), Cilla Black (‘Step Inside Love’),” and The Rolling Stones (“I Wanna Be Your Man”).  Paul gave Peter & Gordon “A World Without Love” (a number one hit in 1964) and “Woman” (1966) under the alias, "Bernard Webb."  Why would these songs recorded by other artists be credited to the Beatles if they had not actually written them?

Further evidence that the Beatles wrote their own music lies in a study conducted by university professors. Mark Glickman, senior lecturer in statistics at Harvard University, and Jason Brown, Professor of Mathematics at Dalhousie University, designed a  computer model that broke down Lennon and McCartney songs written between 1962 and 1966 into 149 different components.  The program analyzed frequency of chords, chord transitions, melodic notes and pitch to determine the musical fingerprints of each songwriter. 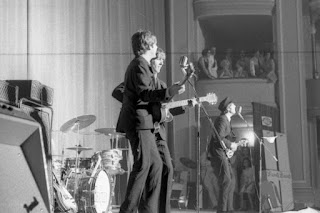 The researchers noted that the pitch of Paul’s songs was often complex and varied, while Lennon’s remained relatively static.  For example, Glickman said that the pitch in Lennon’s song, “Help,” “doesn’t change very much. It stays at the same note repeatedly, and only changes in short steps.”   By contrast, Paul’s song, “Michelle” (1965), is “all over the place” in terms of pitch. How could these scientists identify whether John or Paul wrote a song, if all of the songs had been written by the same person?

Perhaps the strongest evidence that the Beatles wrote their own music is the fact that McCartney regained the copyright to the Beatles catalog after a decades-long legal battle. In 1985, Michael Jackson bought ATV's song catalog for $47.5 million, which included almost 250 Lennon/McCartney tunes. In 1995, Jackson sold half of the ATV catalog to Sony for $100 million, forming Sony/ATV Music Publishing.

Using the U.S. Copyright Act of 1967, McCartney began the process of reclaiming the rights to 32 songs in 2015. However, a British court ruled that the U.S. Copyright Act did not apply in Great Britain, making it more difficult for him to legally secure the rights to the music there. Thus, the news that McCartney regained the rights to the songs in a private settlement with Sony ATV was not only a big win for him, but strong evidence that McCartney wrote them. (The truth or falsity of Faul’s identity was not in dispute in this case).

“It's quite feasible in light of his biases that the good doctor [Coleman] was himself disinformed in regard to The Beatles. Such disinformation would serve to discredit his book in general and also to demoralize his readers by suggesting that the GSE [Government Sponsored Enterprises] are 100% behind all great creative endeavors, the implication being that we, the human herd, are unimaginative clods from whose ranks nothing exceptional springs lest it be nurtured by evil... Creative expression is a human trait, evident in everything we are. The Agenda must place limits on this creative potential, including our awareness of even having it, because this is our strength.”  Coleman seems to have been unaware that the original Beatle Paul was impostor-replaced, which casts further doubt upon his research.

Such disinformation about The Beatles supposed lack of musical talent may be aimed at belittling The Fab Four and making them seem to be inconsequential.  If they were all talentless frauds, then there would be little interest in uncovering the truth about what happened to Paul, and thus encourage people to let it be.

Tonny Nowhere Man's video that accompanies this article can be found HERE.


Thanks to Andrew Favretti for help with the research.

Beatle Stories. “George Harrison saying Paul McCartney ‘Ran out of good songs of his own!!’..” At 0:35.

Deezen. “Paul McCartney’s ‘Scrambled Eggs,’ Which Evolved Into One of the Most Recorded Songs of All Time.”

Edmonds. “Here, There, and Everywhere.”

Lady Ruth. “40 lies of Faul or how to rewrite the story.” Citing Many Years From Now; Shelokhonov. “Paul McCartney Biography.”

“Paperback Writer by the Beatles.”

Thomson. “The madness of king George: The Beatle who feared being shot and hated being 'pushed around' by Paul McCartney.”

Add Tina as a friend on MeWe
Posted by Plastic Macca at 12:52 PM