It has become clear over time that original photos of Paul McCartney and Bill (Faul) have been manipulated to make both men appear as the same person.

Likewise early video footage has been "cleaned up" or remastered for the same reason. Below is the original clip of a BBC interview with Bill in 1968. Lets take a look -

Paul is Dead :The Powers of the digital remastering "Faul as Paul [1968]" only true HD

First we'll examine Bills eyebrows and hair. His hair has a bright sheen indicative of colouring. It is either a false piece or copious amounts of black colouring were applied. His eyebrows are also unusually black and appear comically false.

Spot the differences, amazing isn't it!

- Gone is the brightly coloured black hair (if not a hairpiece) replaced by an extraordinarily realistic looking head of hair.

- The footage is also compressed to give Bill a fuller appearance. Gone is the gaunt, skeletal frame replaced by a chubbier, healthier looking individual.

It's almost hard to believe that both of these segments are of the same interview, with the same individual at the same point in time. This is what can be carried out with modern vid tech to "clean up" the past, so it can be said double.... what double!

Bill (Faul) moulded into the appearance of the man he replaced. 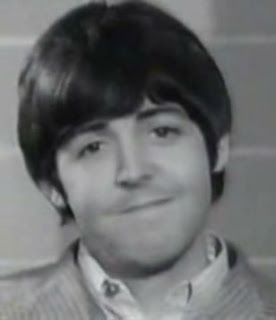