It is fairly well-known and accepted that Saddam Hussein was imposter-replaced. Hussein had several doubles, and some claim the man who was captured and hanged (or mock hanged) was not the real Saddam Hussein, but was rather a double. The use of doubles in politics might shed light on CIAlebrity imposter-replacement in the entertainment industry.

In 2003, German television network ZDF broadcast claimed that Iraq's former president Saddam Hussein was frequently replaced with doubles for TV appearances. This analysis was based on sophisticated measuring techniques, which detected discrepancies in the position of Hussein's facial features and blemishes from appearance to appearance. It was supported by the opinion of Jerrald Post, the man who created the CIA's Psychological Profile Unit.[22] It was also alleged that Austrian politician Jörg Haider had actually met a double when he thought he was meeting Hussein.


... A German forensic pathologist studied hundreds of Hussein photos and videotapes, concentrating on his mustache and eyebrow measurements.

Then he used computer software to locate specific points such as the tip of his nose and the cheekbone creating a face print which was compared to the Hussein photographs.

His conclusion: that there are three Hussein impersonators, all with small, distinct differences.

Intelligence officials have long suspected that the Iraqi president makes ample use of body-doubles -- an idea reinforced two weeks ago when a German television news program asked a forensic pathologist to examine hundreds of archived photographs and video stills of the Iraqi leader. The pathologist, Dr. Dieter Buhmann of Homberg University in Saarland, determined that there are at least three Saddam Hussein lookalikes in rotation, making public appearances, firing rifles, smoking cigars, waving and strutting. (The doubles rarely speak, it was suggested, because Mr. Hussein has an inimitable lisp.)

Iraqi dissidents have told stories of impostor Husseins in the past -- of recruitment schemes and plastic surgery, of training in mannerisms, strides and tics. The differences can seem remarkably subtle. In some instances, Dr. Buhmann suggested, the face of the doppelgänger was just a hair too wide. In others, the area under the mouth was just a bit too small and too low...

Indeed, the pop-culture fascination with cloak-and-dagger devices like doubles, disguises and decoys tends to give Mr. Hussein's use of lookalikes a sort of buffoonish quality. But this is serious business, with a long history. And it would be naive, some intelligence officials have suggested, to think that everyone isn't playing the game...

''It's definitely a play that one wants to have in their arsenal,'' Mr. Mendez said. ''It's the sort of thing that comes to mind immediately when you think about the good guys and the bad guys. The idea of bilocation -- of being able to be in two places at once -- is key to some situations of security,'' he said. ''Everyone uses it.''

JUST what lengths a government like Iraq might go to is only a matter of resources. Finding lookalikes willing to serve a higher calling isn't difficult, Mr. Mendez said, particularly when patriotic passions are inflamed. Makeup artists are deft at making temporary changes. And turning to plastic surgery for more permanent alterations is common in every corner of international intrigue. Iraq is not likely to be an exception. 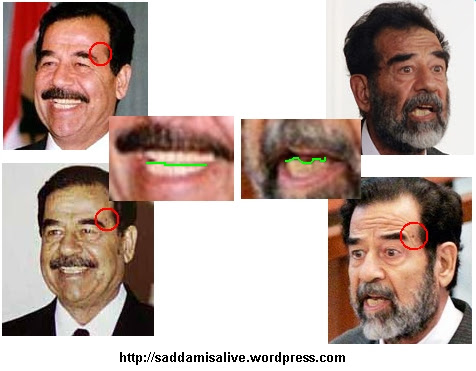 ... Moslem al-Asadi, a doctor living in exile in Iran, said he believes the real Saddam died in 1999 from cancer.

"The real Saddam died because he had cancer of the lymph nodes, and since his death in 1999 they're just showing his doubles" he told the Italian newspaper Corriere della Sera.

But U.S. and British intelligence suspected the footage was prerecorded prior to the attacks...

Despite the reference to Umm Qasr, British intelligence thought the broadcast may have been prerecorded.

"We are well aware that he spent many hours recently tape-recording various messages. We have to do a little more analysis of what he was actually saying to see whether or not that in fact was Saddam Hussein," British Defense Minister Geoff Hoon told reporters.

"I think there are some doubts about whether that tape is canned or whether it's fresh and based on recent events. It would not be a surprise if Saddam Hussein had some time ago put in the can numerous statements designed to be released later," he said...

"The voice is easy to simulate and doubles constantly study video and audio records," argued al-Asadi.

The exile maintains the footage purported to be Saddam Hussein provides the evidence to support his claim that look-alikes are all that remains of the dictator.

Longtime bodyguard Saddam Michael Ramadan in 1979 wrote in the book "In Saddam's shadow" that the Iraqi leader was so ill he was dependent on pain killers, according to the newspaper. Ramadan is reportedly now under the protection of the CIA.

The paper quotes another former bodyguard, who fled Iraq for Israel two months ago as declaring, "Saddam whom you now see, was photographed some years ago."

In an interview with Democracy Now, author John Perkins said:

... And in Iraq we tried to implement the same policy that was so successful in Saudi Arabia, but Saddam Hussein didn’t buy. When the economic hit men fail in this scenario, the next step is what we call the jackals. Jackals are C.I.A.-sanctioned people that come in and try to foment a coup or revolution. If that doesn’t work, they perform assassinations. or try to. In the case of Iraq, they weren’t able to get through to Saddam Hussein. He had—His bodyguards were too good. He had doubles. They couldn’t get through to him...


"Confessions of an Economic Hit Man: How the U.S. Uses Globalization to Cheat Poor Countries Out of Trillions," November 09, 2004, http://www.democracynow.org/2004/11/9/confessions_of_an_economic_hit_man

Hussein's wife claimed the man in custody was not Hussein, but was one of his doubles:

Sajida Heiralla Tuffah, after the Russians demanded she be allowed to visit her imprisoned husband Saddam in Qatar:

"Sajida arrived from Syria with her official escort Sheikh Hamad Al-Tani, and then entered the prison, emerging only moments later pink with rage and shouting, "This is not my husband but his double. Where is my husband? Take me to my husband".

American officials rushed forward to shield Mrs Saddam from perplexed Russian observers, trying to insist that Saddam had changed a lot while in custody and she probably didn't recognise him. This was certainly not the best way to handle the Iraqi President's wife. "You think I do not know my husband?" Sajida shouted furiously, "I was married to the man for more than twenty-five years!" Then she stormed off, never to return."

Hussein's mistress also claimed the man in custody was not Hussein:

Parisoula Lampsos, who says she was Saddam's mistress over a period of nearly 30 years, told U.S. officials and ABCNEWS that the man who appeared on TV was not Saddam.

For starters, she said, the real Saddam has an unusual tattoo: two dots on his left hand that he received in prison years ago. But his eyes are the real giveaway, she said.

This video discusses how Saddam Hussein's body double was hanged (starting at 2:08):

At about 6:00, Greg Hallet talks about how Saddam's doppelgaenger was actually mock-hanged:

UPDATE: A recent article has come to my attention in which CIA admitted to planning to impersonate Hussein.


During planning for the 2003 invasion of Iraq, the CIA's Iraq Operations Group kicked around a number of ideas for discrediting Saddam Hussein in the eyes of his people.
One was to create a video purporting to show the Iraqi dictator having sex with a teenage boy, according to two former CIA officials familiar with the project.
“It would look like it was taken by a hidden camera,” said one of the former officials. “Very grainy, like it was a secret videotaping of a sex session.”
The idea was to then “flood Iraq with the videos,” the former official said.
Another idea was to interrupt Iraqi television programming with a fake special news bulletin. An actor playing Hussein would announce that he was stepping down in favor of his (much-reviled) son Uday.
“I’m sure you will throw your support behind His Excellency Uday,” the fake Hussein would intone.
The spy agency’s Office of Technical Services collaborated on the ideas, which also included inserting fake “crawls” -- messages at the bottom of the screen -- into Iraqi newscasts...
The reality, the former officials said, was that the agency really didn’t have enough money and expertise to carry out the projects.
“The military took them over,” said one. “They had assets in psy-war down at Ft. Bragg,” at the army’s special warfare center...

Posted by Plastic Macca at 7:44 PM