Getsmart is a researcher whom I greatly respect and admire. I have invited him to be a contributor to the Plastic Macca blog. For now at least, I will post for him. I found this recent post of his on Sgt. Pepper to be especially insightful and Illuminating. Even if I don't necessarily agree with everything, I think it is worthy of thought and discussion. 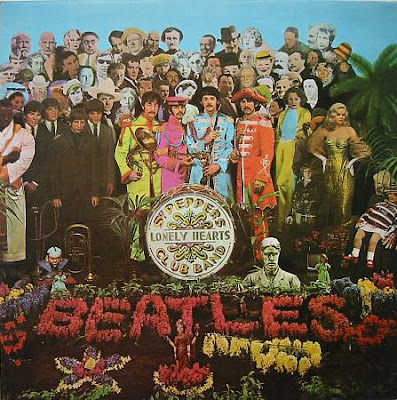 I venture to suggest that all of the individuals present on the cover of Sgt. Pepper may have been participants in the Tavistock MK-Ultra mind control mass manipulation operated through puppet politician actors, film stars, etc. and it is no coincidence that Aleister Crowley is present. The cultural control of populations by means of fabricated and coached celebrities is an operation which predates the twentieth century.

After examination of the List of images on the cover, it seems that it isn't so far fetched that those on the Sgt Pepper jacket were probably participants in Mass Mind Control through celebrities.

Here is a small compendium of potential links of all those shown on the cover of the Sgt Pepper album with the Illuminati Bloodlines behind the Tavistock Institute and the Great Beatles Manipulation.

[Please support this blog by clicking on our sponsors' links - Thanks!]

The numbering will be off, as I first used one template which got lost, and then I downloaded another one, but it should help more than giving no visual referencing.

Numbering of individuals on the album cover: 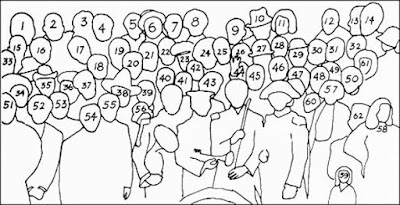 2. Sinister occult leader Aleister Crowley.The Beast 666 who was co-Founder of the Tavistock Institute

3. Bawdy hellraising actress Mae West.Shocking promoter of a "Sexual Revolution" in the 1920's

6. Comedian and actor W.C. Fields.Child hater who as Dionysos through wine and madness ended care and worry.

9. Dancing movie legend Fred Astaire.In-law of the Duke of Devonshire and a CIA Director, partner of Claire Luce went on to act at Stratford-upon-Avon.

10. Leading artistic chronicler Richard Merkin.American designer who may have contributed to the crisp "Beatles look?"

12. Big-faced actor Huntz Hall.The most sensitive of the Dead End Kids and Bowery Boys of early Hollywood serials - the US corollary of poor lads from Liverpool.

14. Cutting-edge beat poet Bob Dylan.Himself murdered and replaced by an impostor who confesses to his pact with the devil.

15. Fifth Beatle Stuart Sutcliffe.Died of brain hemmorage in 1962 the day before The Beatles' return to Germany.

20. Poet Dylan Thomas.Author of the highly revealing Illuminati poem "My World Is Pyramid".

25. Radio favourite Tommy Handley.Comedian of the BBC show "It's That Man Again" in which he replaced Adolf Hitler as "That Man".

28. Spectral yogi pin-up Sri Mahavatar Babaji.The "Great Avatar" and "revered father" was a legendary person of whom nobody knew the age, family, place of birth, true name, or other details.

29. One half of comedy double act Stan Laurel.In 1910, Stan was in Fred Karno's troup and "played the double" of a young comedian: Charley Chaplin.

31. Tubbier half of comedy double act Oliver Hardy.Despite being a trained attorney, Freemason Oliver and Stan's contracts left all royalties to the Studios.

32. Author of the Communist Manifesto Karl Marx.Creator of Marxism on the Rothschild Payroll

39. Wise-cracking stage man Max Miller.Britain’s top comedian known for holding an audience in the cup of his hand.

40. Another Petty Girl.George Petty said "When you touch the wrist of a Petty Girl, you almost expect to feel a pulse."

41. Moody actor Marlon Brando.Stanislavski actor who mastered the intangible aspects of human behavior such as emotions and artistic inspiration.

43. Irish Writer, poet and wit Oscar Wilde.Wrote the Portrait of Dorian Gray invoking the sale of one's soul to evade the consequences of Evil acts.

45. Modern artist Larry Bell.He was also a composer, who reminds of "the best of The Beatles" according to William Zagorski - Fanfare.

47. Tarzan actor Johnny Weissmuller.Olympic swimming champion who claimed that his Hollywood career was nothing but a "succession of frauds".

48. American author Stephen Crane.Before the haunted manor of Brede Place he lived in the Limpsfield-Oxted area near members of the socialist Fabian Society.

49. Music hall comedian Issy Bonn.Issy Bonn Known for singing "My Yiddish Mama", his hand is shown above Paul's head in sign of death.

54. Alice In Wonderland writer Lewis Carroll.His books were used by Tavistock in the Mind Control programming of children

55. Boxer Sonny Liston.Won all his fights by Knock Out except one, to Mohammed Ali, died mysteriously in Las Vegas in 1970.

65. Child star Bobby Breen.Lenny Bruce mentioned Breen in his comedy routine "Hitler and the MCA" where two German talent agents in 1930, desperate to find a dictator, discover and recruit a handy house painter.

67. Legionnaire from the Order of the Buffalo.Member of the actors' Royal Antediluvian Order of Buffaloes tied to the Grand Lodge of England?

68. Shapely actress Diana Dors.Lead role in Hitchcock's "The Sorceror's Apprentice" about the Devil and Assassination, her Estate vanished.

69. Child star Shirley Temple.Precocious actress exposed in the womb to music and litterature, her husband was Director at Tavistock's offshoot Stanford Research Institute.

72. Statue from home of John Lennon.Controversial attributions ranging from a young Walt Disney to a gaunt Aleister Crowley.

75. Figurine of Hindu goddess Lakshmi.Kundalini sexual yoga connected to the cult of Isis in Book IV of Crowley's Magick in Theory and Practice.

Posted by Plastic Macca at 6:49 PM