"You can't always tell the would be's from the real thing" 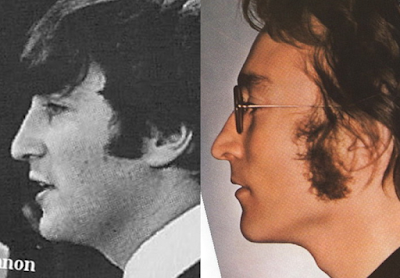 
This was posted by Getsmart, a fellow PID researcher and guest contributor, on the ATS forum [link]. It is an analysis of the Beatles August 28,1966 LA press conference. As has been discussed in a previous blog post, Was Paul McCartney replaCIAed in August 1966?, I believe this is the first public appearance of Faul as Paul McCartney. Getsmart posits this may also be the Lennon double.

In my opinion, John Lennon's name and image were hijacked to make "him" an ineffectual "leader" of the anti-war movement. In this way, the powers that be could control their opposition. John ONO Lennon and Yoko Ono gave MontyPython-esque interviews against the Vietnam war that made the peace activists look ridiculous, thus discrediting the whole peace movement. This is very similar to how Jim Morrison (the son of the admiral commanding at the false flag Gulf of Tonkin "attack") was planted as a "leader" of the anti-war movement. It just so happens that December 8 is the date for both Jim Morrison's birthday and Lennon's murder.
________________________ 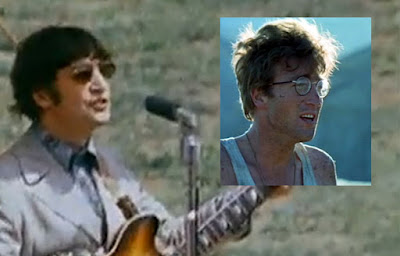 Here is a video of the August 28th, 1966 Los Angeles press conference in which some particularly interesting questions were asked.

After minute 5:00 John replies to the question:"What was the song Eleanor Rigby based upon?"

It is important to realize that this is a song which we now know to have been written on the basis of names on tombstones in St Peters Cemetery where both Paul and John used to roam when they first met. Here is a post which clarifies that John must have known exactly what Eleanor Rigby was based upon, but an impostor couldn't possibly fathom what.Source of The Beatles song Eleanor Rigby

He then seems to be rather bothered by the ensuring hilarity from the crowd. He goes on to interrupt a journalist to correct himself, looking at Paul for a cue, and then says something difficult to make out any better than "Two battle boys" or "Two babble boys," thanks if you can help in deciphering that phrase.

I think that he was referring insultingly to the REAL PAUL and the REAL JOHN whom they have already replaced as their doubles, adding insult to injury by calling them "a couple of queers."

This smacks of "army talk" and does not in any way correspond to the vernacular used by open-minded sixties rebels. Was it because of that giveaway comment that then tried to correct himself? Did he get a signal from a handler to repair his glaring mistake?We have therefore been - and probably since this early date of August 28th, 1966 - in the presence of two impostors posing to the press and the public as the real John Lennon and the real Paul McCartney.

We are obviously not the only ones who noticed strange goings on insofar as The Beatles' identities were concerned, and because of this broad concern among many witnesses, the journalist was then brought to pointedly ask another question - note that this was way back in the summer of 1966:


"Have you ever trained or used Beatle Doubles as DECOYS?


John replies meekly "No... No..." and Paul meekly echoes an identical mimicked "No...No..."and then adds:"We tried to get Brian Epstein to do it, he wouldn't do it."This may well be revealing of why Brian Epstein was assassinated, unwilling he was to assist the murder and replacement of his band members.

In the same press conference video, at minute 6:38 a journalist asks Paul who does Beatles songs the best. Paul looks about as if 'obviously' The Beatles themselves would do Beatles songs the best, but then looks furtively at an equally silent John and embarrassed, he doesn't reply. Obviously they knew they were totally lame as replacement musicians and unable to "do Beatles songs properly," so they both chose to clam up.

At minute 9:41 FAUL gives us his first in a very long series of false identity confessions, with the following statement:


"We know our Real Image which is nothing like our image."


Upon the crowd's uproar he adds loudly:"Forget it !"

Apparently we are not to remember what he says when he has an unconscious lapse. He also possibly thought he'd cleared up his unintentional leak by issuing a 'command' such as those used when coaching mind controlled impostors. Smiling at the crowd, he then looked furtively at someone in the public to his front left, at which time his smile suddenly turns to a frown and he says:"What I meant to say..." followed by silence, hiding his eyes with his hand, not knowing how to get out of his predicament by another statement given that the initiative was not his own but probably commanded by a handler in the audience. John comes to his rescue with another flippant remarks that sounds something like "I like sticks or bricks" although I possibly inaccurately deciphered what John said at minute 10:00.

At minute 12:35 John uses a common impostor 'question avoidance' tactic by replying "No comment" to a simple question about a public statement he had recently made to a journalist and which had been published in the press. Faul, noticing that his response was unsatisfactory and maybe not wanting to be the only one looking like a loser in front of their 'agency impostor handlers' - taunted John saying "Come on, John, tell them what you mean." Thus pressured by his co-conspirator's prompting, John nevertheless was unable to reply to a clear question for any politically structured individual such as John Lennon was purported to be. Here is the question along with John's clueless answer:

QUESTION: "Show Business is an extension of the Jewish religion. Would you mind amplifying that?"


John Lennon:"I mean, you can read into it what you like. It's just a little old statement. I was not very serious about it."


QUESTION: "And those words, how did you piece them together?"


Was John Lennon someone who lent himself to making trivial statements about fundamental political matters? Hardly. On this subject, here is what Texe Marrs confirms:Do The Jews Own Hollywood And The Media?

Let us please remember that this is not the Jewish people nor the Jewish religion, but only a small group of fanatics who have infiltrated several nations among which Israel and the USA and who hide behind judaism to dissimulate their plans which have nothing to do with the welfare of anyone Jewish. They are Zionists, and as our current US Vice-President so eloquently puts it, this has nothing to do with being Jewish. The Zionists are the Illuminati

We know that the Zionists were behind WWII and are fully enmeshed with the CIA and the Illuminati. As evidence, here is how Zionist Jacob Rothschild designed the Israeli Supreme Court filled with Illuminati symbolism, acting in mockery of the honest and honorable citizens of Israel, a Zionist movement that this video says is ANTISEMETIC. The Zionists are Illuminati USURPERS of Judaism

John Lennon obviously knew about this, at least insofar as it extended to the music industry and show business at large. He was quoted by the press for such strong opposition and public statements, which explains why John was replaced, and Paul obviously along with him. John and Paul were rebellious enough for their Agency impostors to find it politically correct in those reactionary times to call them "Two queers". Pardon me if I don't share their sense of humor defiling the dignity of two honorable young men who served humanity with their duty to the TRUTH.

At the end of the Los Angeles video, at minute 14:00 John goes so far as to declare right before turning to Paul laughing:


"You can't always tell the would be's from the real thing."

Let us remember that

The Beatles were a deeply politicized band, something which was obscured by their drift into mindless psychedelic spaced out apolitical passivity from Sgt Pepper onwards. Today they appear as either naive lyric artists when looking at their early days to an apogee of studio musicians and 64 track mixed sound effects to blow out your mind on drugs. The hard edge was entirely LOBOTOMIZED from their music as if their minds had been removed, something which was apparently done by also removing and replacing their bodies with look-alikes.