At 3:45, Derren Brown asks a woman if she knows how to get to St. Paul's Cathedral. While she is focused on the map, a couple of people carrying a large portrait of Derren Brown come between them, and another man takes Derren Brown's place. The woman does not appear to notice that Derren was switched out. Derren's comment was: "I'm sure that wouldn't have worked so well if I was a super famous pop-star."

This was not an accident! It seems highly likely that Derren Brown is onto the fact that Paul McCartney was switched out for Faul. I suspect that Derren Brown purposefully referenced St. Paul, as that is a well-known Paul Is Dead clue song (see St. Paul - Terry Knight revealed Paul was dead). 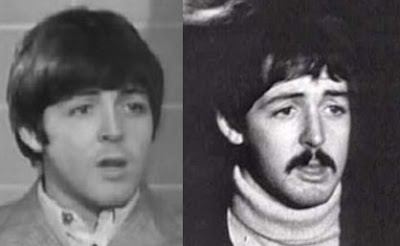 I can see how Derren Brown is using the suggestion of the portrait plus distraction with the map to keep most people from realizing that he had been swapped out. What I would like to know is how have so many people been blinded to the fact that Paul was switched out? Is it some sort of mind control? Is it suggestion and trance? If this spell could be broken, then people would wake up to the reality that Paul was replaced.

Thoughts? Please put in comments below.

Posted by Plastic Macca at 4:12 PM