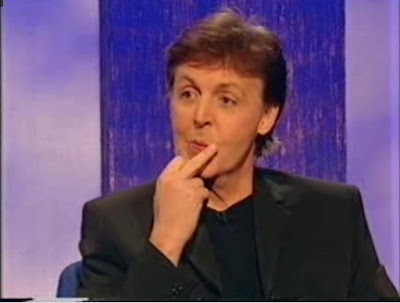 If your new to the entire story of the killing and replacement of James Paul McCartney, you have to look at a lot of the evidence that is out there.

My own search for the truth around the Paul is dead / Paul was replaced story started in the late sixties and it was not until 2010 while living in New Zealand that I devoted over 1000 hours to the subject of "Faul."

I'd like to thank Tina for allowing me to place additional research here. It means a lot to me as I am a syndicated radio and music producer by profession and took on the name of William Billy Shears to simply be able to "research" and "vent."

There are millions today who were not around in the early 1960's when John, Paul, George, and Ringo hit the world stage. So first I want you to watch the real Paul. Yes, thousands of photos and videos are being changed as Faul's manager even stated that over the past 5 years that he has managed "Faul," that all of the photos and videos are being retouched. (I smell more fish).

To get you quickly up to speed I want to you look at an original James Paul McCartney. You may have to watch it more than once as he replacement (and there may be more than one), took over since 1966.


A link to the video above: http://youtu.be/tNYVxqJ83W8

Got it? The reason I became so obsessed with the story was I noticed bizarre differences in not only his "personality," I noticed changes in attitude.

Now fast forward to 1968. Really compare the two interviews. Now I know what is below is from 1968 and if you look carefully, you'll see that the mannerisms are "imitated" not real.

This video was placed here for educational purposes only and without profit.

After looking at hours of video tape, I also started looking at photographs that look strange to me. Ready to look at a few? Hold on to your seat bels.

So how did the charming Paul turn into such a rude guy.....

This video was placed here for educational purposes only and without profit.

If you think the above picture(s) [removed], are Paul you better look closer. The video at the top of the post is very telling. Now look at another situation where Faul is just rude:

Little is known about the impostor. He is sometimes known as William Shears Campbell, or William Sheppard. It is said that he once won a Paul McCartney lookalike contest, and was plucked from obscurity to become the new Paul. Some have claimed to have known him, but few have corroborated their tales. What is known is that the Faul was required to have many plastic surgeries in order to look more like Paul. Retouching on album artwork and official photos was painstakingly done. In attempt to hide the imperfections, he grew a mustache. And for long, no one suspected a thing. Foolishly, many still don’t.

Most have considered the story of Paul’s tragic death a mere hoax — a story, and a blatantly unreliable one at that. Until now.

Federal law allows citizens to reproduce, distribute or exhibit portions of copyright motion pictures, video tapes, or video disks under certain circumstances without authorization of the copyright holder. This infringement of copyright is called FAIR USE ... and is allowed for purposes of criticism, news reporting, teaching and parody.