The bigger they are, the harder they Faul

"I look pretty tall but my heels are high."
~ The Who, from "Substitute" 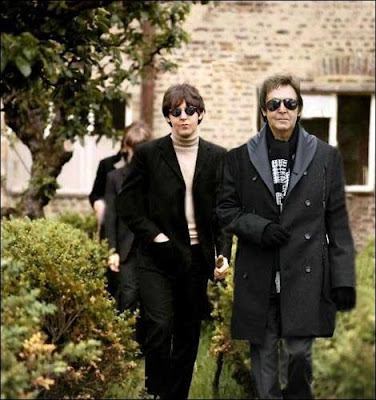 Paul McCartney may have been smaller than "Faul,"
but his stature as a musician is colossal.

One of the differences between Paul McCartney and Faul that stands out is the difference in height. Paul's "official" height was 5'11":

If one compares the heights of the Beatles over the course of their history, one will notice that the relative heights seem to fluctuate. In the beginning, the heights were more even. In the latter years, a great discrepancy between Paul's and Ringo's height becomes apparent. If images do not show in the blogger window, simply click on them to see them full size. 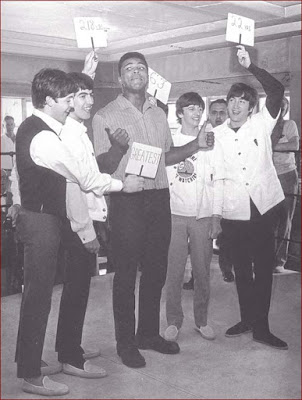 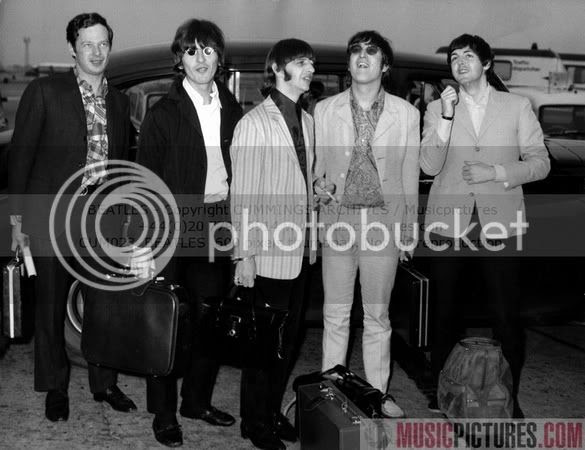 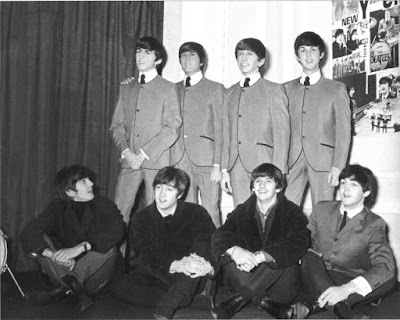 The wax figures of the Beatles made by Madame Tussaud's Wax Museum show the lads' heights. Paul is a bit taller than Ringo, but there does not seem to be a great height disparity. Madame Tussaud's figures are "based on hundreds of precise measurements... [M]ore than 250 precise measurements of the body... with calipers and cloth tape measures." [source: The Unique Art of Wax Figure Making] 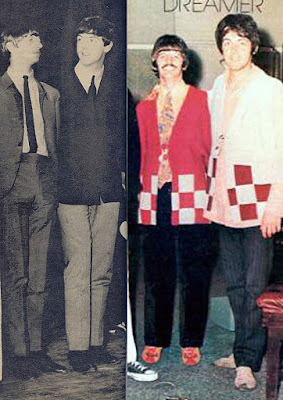 At some point, something curious happened. The heights became very uneven. This is most obvious between Paul and Ringo. 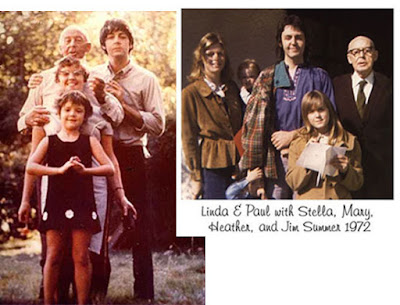 Paul was a little bit taller than his father, but Faul is a great deal taller: 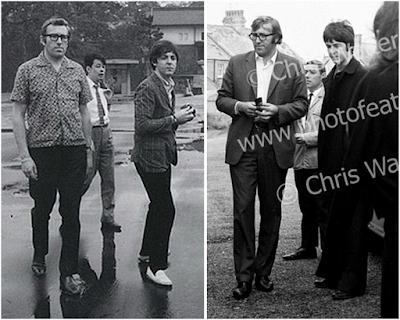 Faul's height seems to vary when compared to Mal Evans: 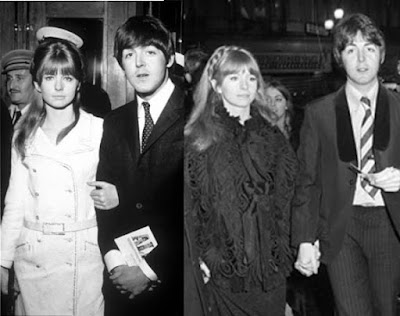 What is going on here? Faul may be nearly six feet tall, but the real Paul McCartney was not that tall. "Anonymous" has offered his estimations of Paul's and Faul's heights based on the length of the instruments, which are a known quantity. Using the Hofner violin bass (30 inch scale) and other instruments as a yardstick, Anonymous has determined that Paul was actually 5'7" to 5'8," and not 5'11" as we have been taught. Faul is about 2.5 inches taller than Paul. Using Ringo's 20 inch diameter bass drum, Anonymous calculated Paul's height to be approximately 5'7" to 5'8". 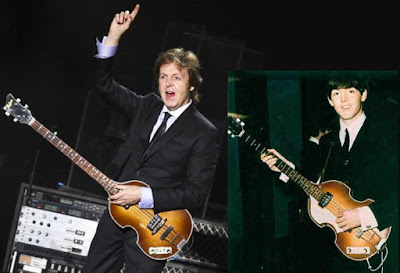 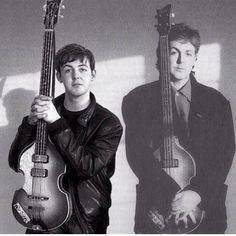 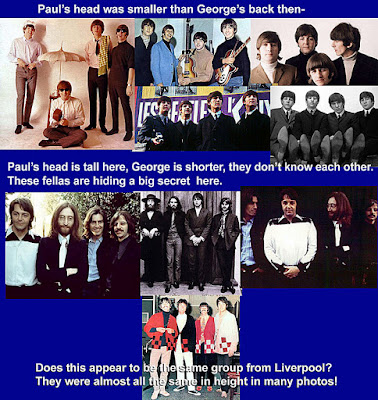 After Paul was eliminated, the carefully controlled media distribution concealed the height difference from the public. Faul is most often shown playing piano, sitting down, or with his feet or lower legs obscured, unless there is no instrument in hand. Faul also switched to using an Epiphone, which is about 4 inches bigger, making the size ratio seem consistent.

Anonymous also used the length of Faul's English Horn (Cor Anglais), which he is seen holding on the Sgt. Pepper album (1967). Anonymous used its length (31.14 inches) to calculate the heights. 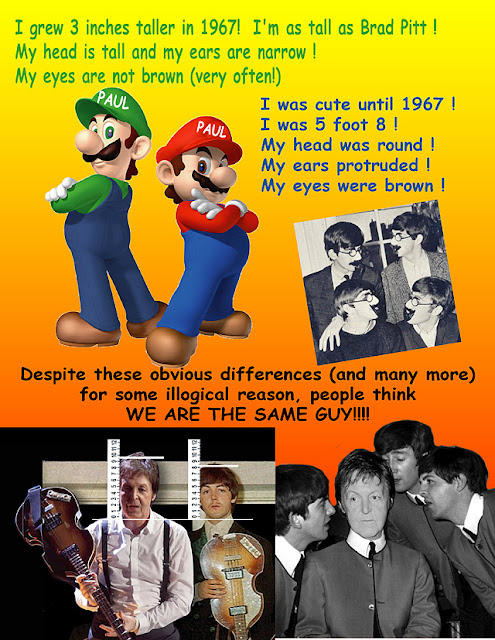 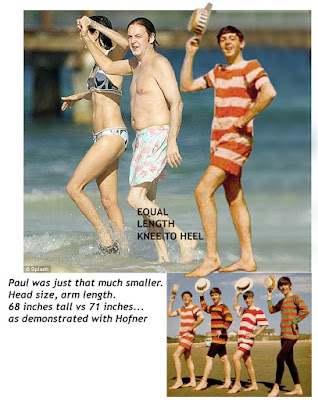 In addition to using instruments to calculate the heights, Anonymous matched up the shin bones. Using this method, he revealed again that Faul is taller than Paul was. Anonymous has added some of his own comments to these images.

It seems that our efforts to uncover the truth about Paul's replacement have been complicated by out-right photo-tampering. Pictures of Paul and Faul have been altered to conceal the height difference. The Powers that Be are re-writing history.

Anonymous predicted that new full-lenth photos of Faul would appear as a "response" to his efforts, and indeed they did. On March 25, 2010, there were suddenly a new series of Sir Paul pictures from LIFE magazine on Google Search. It seems that the Hofner ratio was modified in those pictures. However, it appears the revisionists mis-calculated the scale and made Faul even smaller than Paul was - a petite 5'3" - 5'4". From Anonymous:

Here is the absolutely corrupt LIFE photo manipulation, the obvious obliteration of truth.
These pix were either posed with a really huge Hofner, or someone has been tweaking reality, The revisionist reality of Big Paul converted to Little Paul, even smaller than the original.
Stinks of some cover-up beyond ego.
LIFE has done some twisting before, as in the Re-born Macca of 1966.
These guitars are all calibrated to be equal in bulk & size on this panel. Paul is not 5ft 3 inches.

Let us not forget LIFE Magazine's role in convincing everyone that "Paul was still with us."

Special thanks to "Anonymous" for his research and images.

Posted by Plastic Macca at 4:44 PM