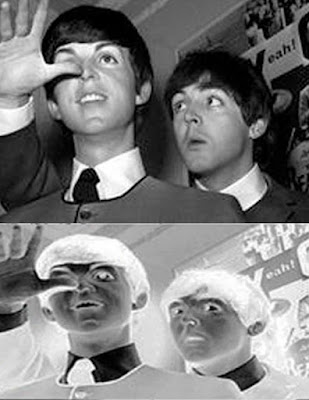 Paul McCartney with the Madame Tussaud's wax figure of him.
Notice the eerie picture of "Faul" underneath the "Yeah!" poster.


The entertainment industry is instrumental in selling the agenda to the public. It can be used to condition the masses into thinking something is "cool" or not. For example, rockstars have been used to promote drug use and a decadent lifestyle as "cool."

These interviews are with Alan Watt:

How the Media Controls Your Mind:
http://www.youtube.com/watch?v=Qlr0qf0eTHU

I wonder how one might "market" a mind-control drug such as LSD to the masses & get them to take it willingly? Maybe if a super-famous, popular rockstar did it, other people would try it... Here is "Paul" talking about taking LSD in a 1967 interview:

Starting around 3:00, Dick Cavett talks about the Beatles' huge influence & how it might have influenced people to take drugs. George said after "Paul" said he took LSD on TV, the "whole world went crazy."

According to this, it seems that Paul was somewhat reserved with drug use. He smoked marijuana (according to the "official story"), took only one prelude usually, & outright refused to try heroin. Discussion of "Paul" after 1966 is about the impostor, who seems to have been much more open to drug use.

...McCartney's introduction to drugs started in Hamburg, Germany.[142] The Beatles had to play for hours, and they were often given "Prellies" (Preludin) by German customers or by Astrid Kirchherr... McCartney would usually take one, but Lennon would often take four or five.[143]...

McCartney remembered getting "very high" and giggling when The Beatles were introduced to cannabis by Bob Dylan in New York, in 1964.[144] McCartney's use of cannabis became regular, and he was quoted as saying that any future Beatles' lyrics containing the words "high", or "grass" were written specifically as a reference to cannabis—as was "Got to Get You into My Life".[145]... Help! director Dick Lester said that he overheard "two beautiful women" trying to cajole McCartney into taking heroin, but he refused.[147]...

McCartney was introduced to cocaine by Robert Fraser, and it was available during the recording of Sgt. Pepper's Lonely Hearts Club Band.[149][150] He admitted that he used the drug multiple times for about a year but stopped because of the unpleasant come down.[151]

In 1967, McCartney said everybody sat around and took LSD, although McCartney had first taken it with Tara Browne, in 1966.[154][155][156] He took his second "acid trip" with Lennon on 21 March 1967 after a studio session.[157] McCartney was the first British pop star to openly admit using LSD, in an interview in the now-defunct "Queen" magazine.[158] His admission was followed by a TV interview in the UK on Independent Television News on 19 June 1967, when McCartney was asked about his admission of LSD use, he said:

“I was asked a question by a newspaper, and the decision was whether to tell a lie or tell him the truth. I decided to tell him the truth ... but I really didn't want to say anything, you know, because if I had my way I wouldn't have told anyone. I'm not trying to spread the word about this. But the man from the newspaper is the man from the mass medium. I'll keep it a personal thing if he does too, you know ... if he keeps it quiet. But he wanted to spread it so it's his responsibility, you know, for spreading it, not mine."
http://en.wikipedia..../Paul_McCartney

So, how does all of this fit together? My theory is that the Beatles were a very talented band that got under the control of the Illuminati's Tavistock Institute (TI). I believe that TI tried to use celebrities to push their drug agenda (LSD) [MKULTRA] on the masses as either a mind-control experiment, or just a way to control the anti-war movement that was growing in the mid-60's. Paul must have refused to go along with some part of the agenda. Paul said in 1965 interview that they wouldn’t encourage people not to drink & refused to try heroin... So, Paul, not being a "team player," was eliminated. However, he was popular, so they found a replacement who could exploit Paul’s popularity to push the agenda. Not long after the replacement, Faul did an interview talking about taking LSD, and the “whole world went crazy.”

Paul's murder served as a warning to the other Beatles, friends, family, etc, to not step out of line. John Lennon was assassinated right after he gave a Playboy interview (1980) in which he talked about LSD. He said "they" wanted to control people, but ended up setting them free:

LENNON: "Not in years. A little mushroom or peyote is not beyond my scope, you know, maybe twice a year or something. You don't hear about it anymore, but people are still visiting the cosmos. We must always remember to thank the CIA and the Army for LSD. That's what people forget. Everything is the opposite of what it is, isn't it, Harry? So get out the bottle, boy... and relax. They invented LSD to control people and what they did was give us freedom. Sometimes it works in mysterious ways its wonders to perform. If you look in the Government reports on acid, the ones who jumped out the window or killed themselves because of it, I think even with Art Linkletter's daughter, it happened to her years later. So, let's face it, she wasn't really on acid when she jumped out the window. And I've never met anybody who's had a flashback on acid. I've never had a flashback in my life and I took millions of trips in the Sixties."

The Sgt. Pepper album... compresses the evolutionary development of musicology and much of the history of Eastern and Western sound in a new tympanic complexity. Then add psychedelic drugs. Millions of kids turned-on pharmacologically, listening to stoned-out electronic music designed specifically for the suggestible, psychedelecized nervous system by stoned-out, long-haired minstrels. This... is the most powerful brainwashing device our planet has ever known. Indeed, if you were an observer from a more highly evolved planet wondering how to change human psychology and human cultural development (in other words if you were a divine messenger), would you not inevitably combine electrical energies from outside with biochemical catalysts inside to accomplish your mutation?"

Dr. Timothy Leary, from his "Thank God For the Beatles" essay.
http://www.dread.net...tles/leary.html

Author of The Splitting Image: Exposing the Secret World of Doubles, Decoys, and Impostor-Replacements

Posted by Plastic Macca at 1:59 PM