Get a Clue: Evidence Used to Establish Identity 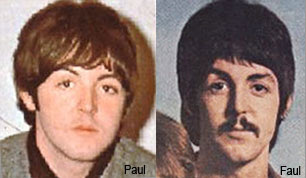 What constitutes evidence to establish proof of identity? What evidence can be used to detect an imposter? First, some basic information on evidence and proof.

ev⋅i⋅dence  [ev-i-duhns] Show IPA noun, verb, -denced, -denc⋅ing.
–noun
1. that which tends to prove or disprove something; ground for belief; proof.
2. something that makes plain or clear; an indication or sign: His flushed look was visible evidence of his fever.
3. Law. data presented to a court or jury in proof of the facts in issue and which may include the testimony of witnesses, records, documents, or objects.http://dictionary.reference.com/browse/evidence


proof  [proof]
–noun
1. evidence sufficient to establish a thing as true, or to produce belief in its truth.
2. anything serving as such evidence: What proof do you have?
...
4. the establishment of the truth of anything; demonstration.
5. Law. (in judicial proceedings) evidence having probative weight.
6. the effect of evidence in convincing the mind...http://dictionary.reference.com/browse/proof

Evidence is gathered, in some cases by forensic scientists, which can then be offered as proof.

Forensic science (often shortened to forensics) is the application of a broad spectrum of sciences to answer questions of interest to a legal system. This may be in relation to a crime or a civil action. Besides its relevance to a legal system, more generally forensics encompasses the accepted scholarly or scientific methodology and norms under which the facts regarding an event, or an artifact, or some other physical item (such as a corpse) are ascertained as being the case. In that regard the concept is related to the notion of authentication, whereby an interest outside of a legal form exists in determining whether an object is what it purports to be, or is alleged as being.http://en.wikipedia.org/wiki/Forensic_science

[Please support this blog ~ click on our sponsors' ads. Thanks!]

Photographs, voiceprints, fingerprints, and other methods of capturing unique identifiers can be used to establish identity. Here is US federal law on that:

[T]he term "record" means any item, collection, or grouping of information about an individual that is maintained by an agency, including, but not limited to, ... other identifying particular assigned to the individual, such as a finger or voice print or a photograph... 5 USCS § 552a(4).

[T]he term "means of identification" means any name or number that may be used, alone or in conjunction with any other information, to identify a specific individual, including any--
...
(B) unique biometric data, such as fingerprint, voice print, retina or iris image, or other unique physical representation; ...

The legal standard in USA is evidence is admissible if it is relevant. From the Federal Rules of Evidence:

"Relevant evidence" means evidence having any tendency to make the existence of any fact that is of consequence to the determination of the action more probable or less probable than it would be without the evidence.

All relevant evidence is admissible, except as otherwise provided by the Constitution of the United States, by Act of Congress, by these rules, or by other rules prescribed by the Supreme Court pursuant to statutory authority...http://www.law.cornell.edu/rules/fre/rules.htm

Posted by Plastic Macca at 5:35 PM