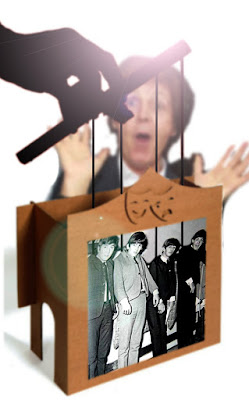 There is a disturbing connection between the Illuminati, the intelligence services & - possibly - the Beatles.

A: As I mentioned before, the CIA and the Illuminati are definitely linked. The top leadership in the CIA are also Illuminati leaders. I mentioned Dulles and Gottlieb as men I knew personally as a child and young adult. The scientists that ran the MK-Ultra and other governmental mind control programs were Illuminists brought over from Nazi Germany...

You could say that the CIA and the Illuminati are hand in glove companions. I know that the different Illuminati groups around the US also send data on the experiments they do to the central computer at Langley, Va. (oh, yes, human experimentation and mind control experiments are still ongoing, it didn't stop with WWII...).

...One of the points that we've tried to make, throughout the course of our discussion of *The Ultimate Evil*, is that, again, the *Satanism* is one of the things that throws people off. The intelligence agencies have *long* used occult groups as a front for activity. For one thing, occult groups exist at the periphery of public scrutiny and therefore are ideal to use as intelligence fronts. In addition to that, because of the unusual activities of occult groups, any suspicious activity on the part of an intelligence agent *using* these groups could be laid simply to the bizarre nature of the group itself. [CN -- also, first amendment protections for "religious" freedom would help shield them from investigation.]

Now specifically, vis a vis mind control, many, many of the cults on the scene today are, in fact, mind-control fronts for the U.S. Intelligence and Military communities.


Paul is Dead: the Rotten Apple 7 (about Charles Manson)
http://www.youtube.com/watch?v=gWFBloufZSU

Paul is Dead: the Rotten Apple 25 (about Charles Manson)

Paul is Dead: the Rotten Apple 66,6 A (about Charles Manson)

The reversal of "Yellow Submarine" (1966) reveals what sounds to be "Hear him Beausoleil" repeated several times. Bobby Beausoleil was one of the Manson Family murderers.

Robert Kenneth "Bobby" Beausoleil... is a convicted American murderer and associate of the Charles Manson "Family" who is serving a life sentence. He killed music teacher and fellow associate Gary Hinman on July 27, 1969, and has been imprisoned since his arrest for that crime...

According to Dave McGowarn, Aleister Crowley was a "notorious occultist and British intelligence asset."
www.davesweb.cnchost.com...

... Fleming was a British intelligence operative during (and after) World War II, when he worked closely with Nazi 'defector' Rudolph Hess and a rather notorious character named Aleister Crowley – a flamboyant occultist, British and probable U.S. intelligence operative, and avid German and Nazi propagandist during World Wars I and II...

Celluloid Heroes: Part I
or: You Can See All the Blood as You Walk Down Hollywood Boulevard
David McGowan
www.davesweb.cnchost.com...

Paul is Dead: the Rotten Apple 28 (about Aleister Crowley)

Aleister Crowley is best today as a founding father of modern occultism. His wide, hypnotic eyes peer at us on the cover of The Beatles' Sergeant Pepper's Lonely Hearts Club Band, and his influence can be found everywhere in popular culture.

"The Great Beast" has been the subject of several biographies, some painting him as a misunderstood genius, others as a manipulative charlatan. None of them have looked seriously at his career as an agent of British Intelligence...

(4) Occultists At War
...There is some evidence to suggest that Crowley was working for MI5 during this time, spying on his fellow OTO initiate Karl Germer, a German intelligence agent, so perhaps his excuse for working for The Fatherland is sound. Whatever the case, he was definitely hired by MI5 during WWII...

"Crowley was an adept amateur psychologist, had an uncanny ability to influence people and probably utilized hypnotic suggestion in his undercover work," Spence added. "The other thing he made good use of was drugs. In New York, he carried out very detailed studies on the effects of mescaline (peyote). He would invite various friends over for dinner, fix them curry and dose the food with mescaline. Then he observed and took notes on their behavior."
Mescaline, Spence noted, was later used by intelligence agencies for experiments in behavior modification and mind control...


And all of this ties in with the Beatles... The cover of the Sergeant Pepper's album by the Beatles showed a background of, according to Ringo Starr, people "we like and admire" (Hit Parade, Oct. 1976, p.14). Paul McCartney said of Sgt. Pepper's cover, ". . . we were going to have photos on the wall of all our HEROES . . ." (Musician, Special Collectors Edition, - Beatles and Rolling Stones, 1988, p.12). One of the Beatle's heroes included on the cover of Sgt. Pepper's was — the infamous Satanist, Aleister Crowley! Most people, especially in 1967, did not even know who Crowley was — but the Beatles certainly did.

The Beatles apparently took Crowley's teaching very serious — Beatle John Lennon, in an interview, says the "whole idea of the Beatles" was — Crowley's infamous "do what thou wilt":

"The whole Beatle idea was to do what you want, right? To take your own responsibility, do what you want and try not to harm other people, right? DO WHAT THOU WILST, as long as it doesn't hurt somebody. . ." ("The Playboy Interviews with John Lennon and Yoko Ono", by David Sheff and G. Barry Golson, p. 61)

Crowley’s photo appeared on the Beatles’ Sgt. Pepper album cover. The Beatles testified that the characters who appeared on the album were their “heroes.” John Lennon explained to Playboy magazine that “the whole Beatle idea was to do what you want … do what thou wilst, as long as it doesn’t hurt somebody” (Lennon, cited by David Sheff, The Playboy Interviews with John Lennon and Yoko Ono, p. 61). This was precisely what Crowley taught. 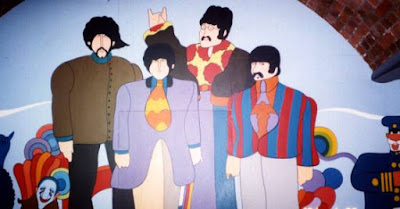 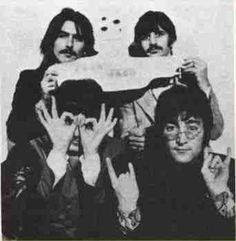 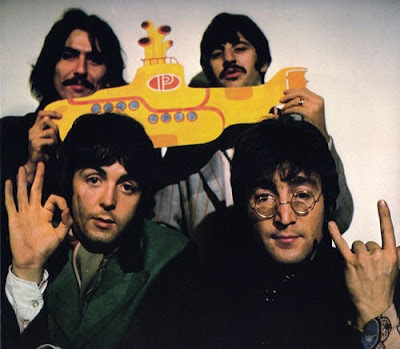 The Butcher Album cover was very controversial and bizarre. 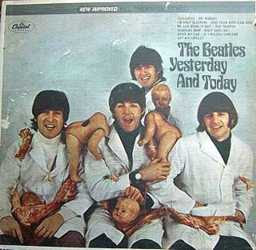 The album is remembered primarily for the controversy surrounding its original cover image, the "butcher cover" featuring the band dressed in white smocks and covered with decapitated baby dolls and pieces of meat...

Released in June 1966, "Yesterday" and Today album's controversial cover marked the first time the Beatles' judgment was severely criticised by the media and public alike...

According to a 2002 interview published in Mojo magazine, former Capitol president Alan W. Livingston stated that it was Paul McCartney who pushed strongly for the photo's inclusion as the album cover, and that McCartney reportedly described it as "our comment on the war." ...

Is it possible that it was more a comment on Illuminati abuse of children? Paul pushed hard for this album cover, and then ended up getting replaced a few months later. Was this cover similar to Stanley Kubrick's movie, "Eyes Wide Shut?" Did they reveal too much about the inner-workings of the Illuminati cult? 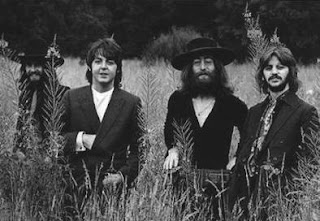 Faul (left) has his hand in his jacket in the typical Masonic fashion...

Please see The Illuminati & the Beatles for more Illuminati-Beatle connections.

Posted by Plastic Macca at 6:50 PM