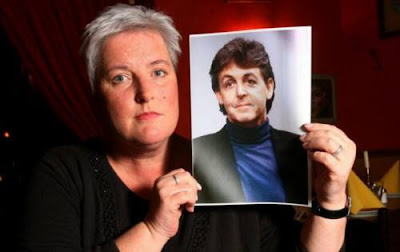 Bettina Krischbin's paternity suit claimed a stand-in was sent for a blood test in 1983.


... A speaker for the Berlin public prosecutor's office, Michael Grunwald, confirmed on Friday to reporters that the office is investigating claims that McCartney faked a paternity test 23 years ago.

Bettina Krischbin, a 46-year-old Berliner, claims that the superstar is her dad. She also says he sent a stand-in to take a blood test back in the 1980s. McCartney has always denied being the woman's father and when the blood test proved negative in 1984, a Berlin court dismissed her claim.

The woman, who works as a caretaker in an old people's home in Berlin, claims her mother, Erika Hübers, had an affair with the British musician between 1959 and 1962. At the time the Beatles were playing on Hamburg's infamous Reeperbahn and hadn't yet risen to fame.

Now she wants to prove that McCartney sent a body double to take the blood test. "The signature in the old documents is false," she told the mass-circulation Bild Zeitung. "We have found the signature is from a right-handed person, but Paul is left-handed."

The woman also told Bild that the ex-Beatle, who is currently worth an estimated €1.1 billion, gave her mother 30,000 deutsche marks (€15,300) in 1966 and then paid her 200 DM a month for years. "Why would he do that if he supposedly isn’t the father?"
Erika Hübers says she supports her daughter's wish for a new paternity test and recognition as McCartney's daughter. "I think we have a good chance now," she said, "because he lied to the court -- provided it with false evidence." 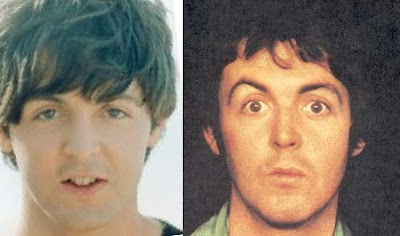 This case has since been dismissed (apparently, committing fraud does not toll the statute of limitations as far as the Germans are concerned). Some interesting things Bettina Krischbin has said, though. From Hardinghaus, Barbara, "Papa Paul," Der Spiegel, 25. Juni 2007:

...At the top of the piece of paper, there stood “Proof of Identity,” and it dealt with a form that James Paul McCartney, Pass Number PB033834033839, signed back in the beginning of the 1980’s, when his blood was taken. On the identification there was a photo attached, a Polaroid of his face. Bettina Krischbin looked at this face a long time. It is, as stated in the documents, Paul McCartney’s face. She committed that face to memory, went home, and looked at pictures of McCartney in the ’80’s. She found that he looked different at this time than he did on the Polaroid, fuller. “He sent a Double to the test back then,” she said. Her mother sat next to her, smoked, and nodded silently.


...She [Bettina] had assembled proof and had gotten ‘two important witnesses,’ who belonged to McCartney’s circle of aquaintances. The world famous singer once supposedly told them, that he had cheated on the blood test... 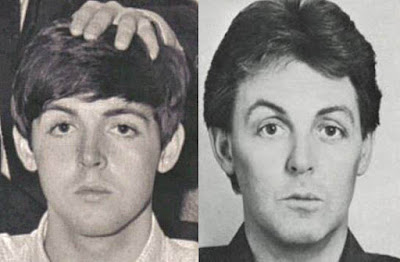 [Please support this blog ~ click on our sponsors' ads. Thanks!]

[Recently looking in the files, Bettina] saw a photo together with a signature from the day blood was taken in London. Her verdict: “That is not McCartney. The real McCartney had at this time a much fuller face. The man in the photo looks like McCartney. But he isn’t.” Even the signature is supposedly false. This signature does not hold up to a comparison with the original in the Hamburger Beatles-Museum. In addition: “Friends of mine have looked at and said: a right-handed person wrote that.”

HTML file with a combination of German/English news reports: http://www.jojoplace.org/Shoebox/McCartney_paternity_case.htm

Posted by Plastic Macca at 8:44 PM