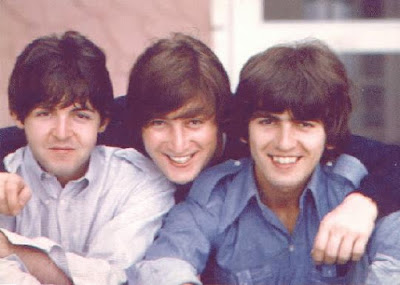 "It seems like anyone who feels that fighting is wrong should have the right not to go."
~ Paul McCartney, 1966 [Source]

"The words, 'Thou shalt not kill' mean just that... not 'Amend section A'... There's no reason whatsoever. No one can force you to kill anyone if you feel it's wrong."
~ George Harrison, 1966 [Source]

There was a CIA program called MK-ULTRA, which oversaw the LSD agenda. I believe it is connected to what happened to Paul. The documents have been declassified and are available using the Freedom of Information Act (FOIA).

There is a scene in the movie "Conspiracy Theory" that gives some background information on the program:

Allen Ginsberg tells the story of how LSD was introduced to the US and what the discoverer of LSD Albert Hoffman said to him about CIAs involvement and Mk-Ultra. Ginsberg mentions that instead of slipping this war drug to people secretly, he helped to open it up (democratize it) and give it openly to people. Was the peace movement another war experiment, strategy or war game? [Source: Project Restoration]

...MKULTRA was divided into 149 Subprojects. One group of Subprojects involved the development and testing of mind control drugs. The goal was to identify compounds which would assist in interrogation and in the creation of amnesia. The CIA sponsored LSD research through MKULTRA. It also financed LSD conferences and books. An undated document entitled “D-Lysergic Acid Diethylamide (LDS-25),” states “Some of the more outstanding effects are the mental confusion, helplessness, and extreme anxiety which are produced by minute doses of this substance. Based upon these reactions, its potential use in offensive psychological warfare and in interrogation is considerable. It may become one of the most important psychochemical agents.” P. 47, 51, 54, 73

Unethical practice by physicians and the direct involvement of pharmaceutical companies are part of the history of hallucinogens. Under TOP SECRET clearance, Eli Lilly Company was given a $400,000 grant in 1953 to manufacture and supply LSD to the CIA. Army LSD research was ongoing in 1977 when LSD was a controlled substance. At least 1,500 soldiers were given LSD without informed consent as part of Army mind control experiments. These facts have never been subject to ethical review or any policy or position statement by any medical organization. P. 52, 53, 68, 73

Vladimir Lenin once said, "The best way to control the opposition is to lead it." The '60's counter-culture may have been more controlled than people realize.

... As was duly noted in the last installment of this series, the law enforcement community had ample opportunity to silence the muses of the 1960s counterculture. That the state consistently chose not to utilize that power says much about the legitimacy of that counterculture. For if these iconic figures posed a demonstrable threat to the status quo, then why would they not have been silenced? Why, for example, were three members of the Buffalo Springfield – Neil Young, Richie Furay and Jim Messina, along with Eric Clapton, Furay’s wife, the band’s road manager, and nine others – arrested in a drug bust at a Topanga Canyon home, only to then walk away as if nothing had happened? Why was this case, and so many others like it, not aggressively prosecuted?

The state had other means to silence young critics, of course, one of the best being the military draft. As Richie Unterberger noted inTurn! Turn! Turn!, “Most folk rockers (if they were male), like their audience, were of draft age.” But curiously enough, “Very, very few had their careers interrupted by the draft.” Actually, Unterberger appears to just be playing it safe with the “very, very few” wording; after reading through both of Unterberger’s books and numerous other tomes covering similar ground, I have yet to read about any folk rocker whose career was affected by the draft in the 1960s...

Hundreds of thousands of young men from all across the country were swept up and fed into the war machine, but not one of the musical icons of the Woodstock generation was among them. How could that be? Should we just consider that to be another one of those great serendipities? Was it mere luck that kept all the Laurel Canyon stars out of jail and out of the military during the turbulent decade that was the 1960s?

Not likely. The reality is that ‘The Establishment,’ as it was known in those days, had the power to prevent the musical icons of the 1960s from ever becoming the megastars that they became. The state, aka corporate America, could quite easily have prevented the entire countercultural movement from ever really getting off the ground – because then, as now, the state controlled the channels of communication.

A real grass-roots cultural revolution would probably have involved a bunch of starving musicians barely scratching out a living playing tiny coffee shops in the hopes of maybe someday landing a record deal with some tiny, local independent label and then, just maybe, if they got really lucky, getting a little airplay on some obscure college radio stations. But that’s not how the ‘60s folk-rock ‘revolution’ played out. Not by any stretch of the imagination.

As Unterberger duly notes in his expansive, two-volume review of the folk-rock movement, “much folk-rock was recorded and issued by huge corporations, and broadcast over radio and television stations owned for the most part by the same or similar pillars of the establishment.” Right from the start, in fact, it was the largest record labels leading the folk-rock charge. The very first of the folk-rock bands, the Byrds, signed with Columbia Records – whose name, in case you were wondering, is derived from a little place known as the District of Columbia, where the label was founded and headquartered some 120 years ago..."

"Inside The LC: The Strange but Mostly True Story of Laurel Canyon and the Birth of the Hippie Generation, Part XV"
Dave McGowan
June 6, 2009
http://www.davesweb..../nwsltr107.html

Timothy Leary admitted to being a CIA asset:

...I told Leary that, based on some of the documents I'd read, it seemed that he could have been just one of many scientist who'd been used without his knowledge by the CIA to conduct their mind control experiments.

"You were witting of it?" I asked in surprise.

"Of course," Leary said, leaning back in his chair with confidence.

I couldn't believe my ears. The CIA had created the "Psychedelic Sixties" with Timothy Leary's help?

"I knew I was being used by the intelligence agents of this country."

"I'm asking you what was the CIA's motive? What were you used for?" I said again.

"The CIA recognized what you probably haven't recognized yet, that I'm a very important national asset...
"What can I say,?" Leary said.

He lit his half-smoked joint and continued. "Yeah. I saw in nineteen sixty-two or three, that there was a world struggle for the control of minds. That's a crude way to say it...
"I saw, after Hiroshima, there would never be a big world war. World war would be at the neurological level, not at the level of tanks and planes and bombs...

"I proceeded as an intelligence agent since 1962, understanding that the next war for control of this planet and beyond, had to do with the control of consciousness. So I had to think very carefully about that...

"I'm talking about time territory, not space territory....
"Of course, you need enough space territory to get your time to make sure that the particular version of the territory of consciousness I would be represented in... I believed, after studying all the other versions, that my philosophy of the future... skip philosophy... my Clausewitz tactics and strategy, or my natural chauvinistic consciousness commitments were very fierce and strong...

"I wanted my species to be recognized, understood and have a strong single voice in creating the reality of the future...
"I wanted to create a segment of the future which I felt I would be the spokesman for..."

I let him talk. When he paused to catch his thought which had drifted away on a puff of muggles, I repeated the question: "Did you ever wittingly work for the CIA?"

"Yes," he answered strongly. "I was a witting agent of the CIA."

I think the anti-war movement was hi-jacked & controlled by TPTB so that it would not pose any real threat. LSD played a part in derailing any real resistance to Vietnam or whatever else.

"... The folk-rock movement, you see, didn’t really last very long in its original incarnation. It quickly splintered into three distinct new genres: country-rock, psychedelic rock, and the ‘introspective singer-songwriter’ school of folk-rock most closely associated with former mental patient James Taylor. None of these musical genres, notably, posed the slightest threat to the status quo. The navel-gazers eschewed social concerns in favor of focusing on tales of personal anguish, the acid rockers largely preached the mantra of ‘turn on, tune in, drop out,’ and the country-rockers largely stuck to traditional – which is to say, quite conservative – country music themes..."

"Inside The LC: The Strange but Mostly True Story of Laurel Canyon and the Birth of the Hippie Generation:Part XVI"
Dave McGowan

Posted by Plastic Macca at 1:48 PM