Not Fauling for it: facial features give Faul McCartney away 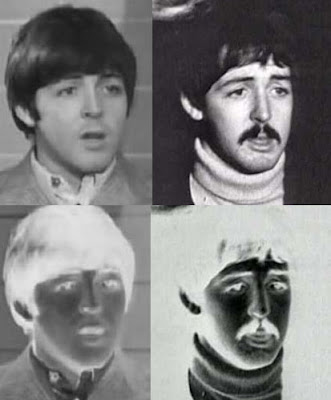 In Doubles & Disguises, I posted about how an out of place eyebrow could give a double away.

... As the CIA's top "master of disguise" for spies and double agents, Bob Barron was well aware of the stakes as he created hundreds of faces and new identities. One suspicious-looking eyebrow or a misplaced ear could lead to fatal results... 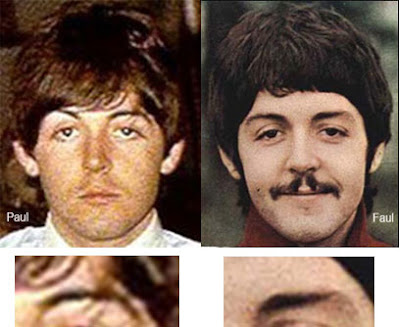 Paul's lips were fairly full with a pointed cupid's bow. In contrast, Faul's lips are thin and have a flat cupid's bow. This comp of Paul from 1964 during the filming of "A Hard Day's Night," vs. Faul from 1968 highlights the difference: 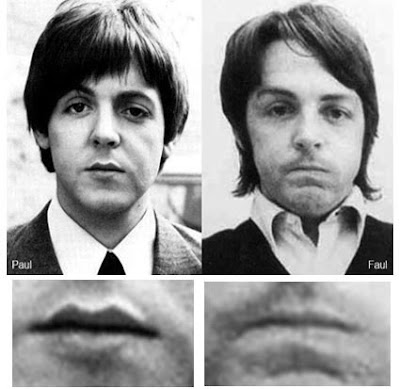 According to forensics experts, "Paul's" lips were "suddenly stretched," which was not possible, even with surgery.

"Compared to the previous picture, that of Sgt Pepper's show clearly that the commessura lip, that is the line formed by the lips of the two, it was suddenly stretched. Which obviously is not possible and that the whiskers cannot camouflage. In other words, the phenomenon is all too frequent these days, the lips can be inflated and increased in volume, but the width of the lip commessura cannot vary that much. May be slight, but this is not the case for the photos examined: here the difference between the before and after is too strong to have been caused by any surgery.”

Technically called trago [tragus]. All we have two, one by ear, but the characteristics are different for every human being. ‘In Germany, a recognition procedure craniometric, identification of the right ear is even tantamount to fingerprint, ie the collection of fingerprints,’ recalls Carlesi. But what is trago? It is the small cartilage covered with skin that overhangs the entrance to the ear and ear canal, like the whole ear, cannot be changed surgically. How then to explain the differences between the right ear of Paul McCartney in a previous snapshot to 1966 and probably a built in the late nineties? It is not only to betray trago a different conformation as well as other parts, just above the ear canal entrance, measurements and dell'antelice propeller. Things that ordinary mortals might seem irrelevant or unclear, but instead, every day, allowing the experts to locate and identify persons, bodies, photographs. 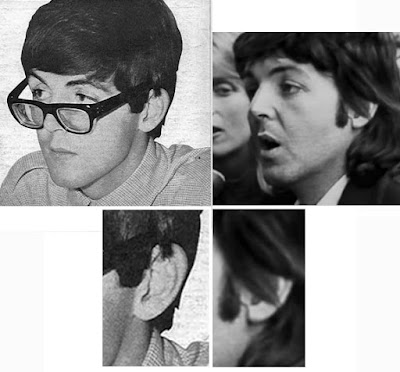 According to forensic scientists, Faul's jawline also differed too much from Paul's to be the same person:

“The mandibular curve between the two sets of photos showed a discrepancy of over 6 percent, well beyond the threshold of error. But there was more. Changed the development of the mandibular profile: before 1966 each side of the jaw is composed of two curves Net, since 1967 appears to be a single curve. There is therefore a curve morphological different.” 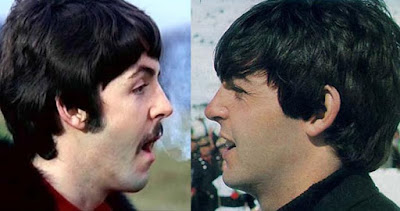 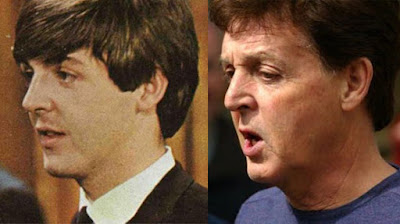 Another giveaway that Paul was replaced is that "his" eye color changed. Paul's eyes were brown/hazel, while Faul's are green. Please see Don't it make your brown eyes *green* for more comparisons. 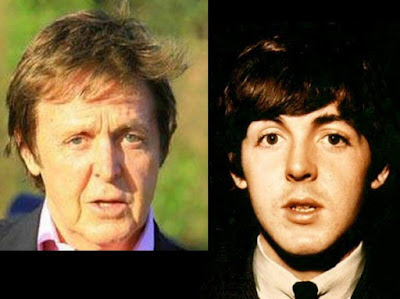 [A]lways under the mustache of the McCartney Sgt Pepper's, maybe it was trying to hide something else: what the experts call it the nose-spinal or sottonasale [nasal spine]. This is the point between the two nostrils where the nose begins to fall off the face: "This is also in this case a distinctive feature that medicine cannot alter surgery. It can change the shape of the nose but not the nose-cord," says Gabriella Carlesi. "And McCartney from the first group of photos and the second point that clearly varies.”

Paul's nose was slightly upturned, whereas Faul's was not: 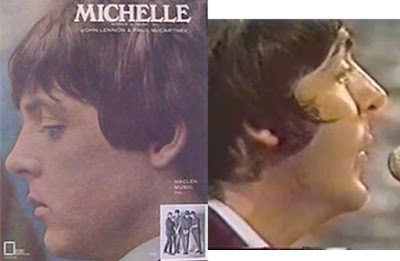 Looks like Faul has been "sculpted" into Paul, but his nose is bent. It is the little details that sometimes give the double away.

As mentioned in Doubles & Disguises, the tip of Faul's nose is a different color form the rest of his skin. It appears that the nose-tip is intended to give the end of Faul's nose that slightly up-turned look that Paul's had. Faul wouldn't pass inspection by an observant border guard, but he has managed to fool a majority of the masses that he is the original Paul McCartney. 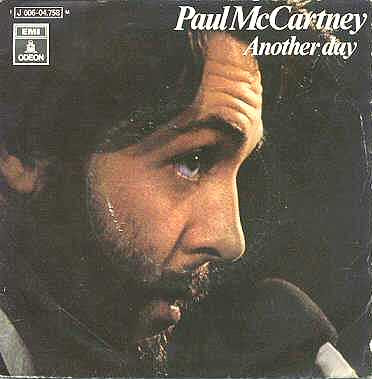 Teeth are considered unique to the individual, and dental records are used to establish identity. These are not the same sets of teeth.

The head shape is also different, which was revealed in this comp by "Anonymous." Using the basses as a scale (10.5" width), he showed that Faul's head is "taller" than Paul's was. 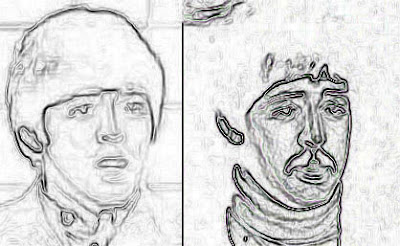 Paul had "singer's chin" - see how the throat is different below. Paul is at the top; Faul is on the bottom: 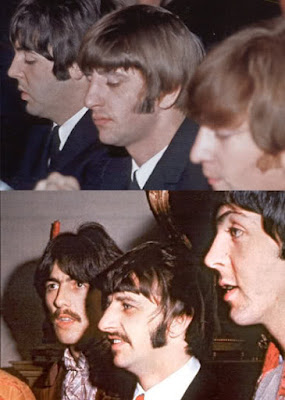 Posted by Plastic Macca at 6:23 PM