"Changing the lifestyle and appearance of youth throughout the world didn't just happen - we set out to do it. We knew what we were doing." 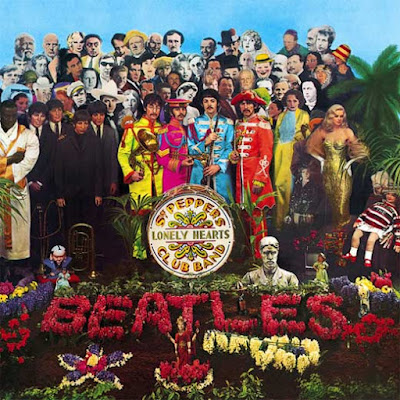 The Beatles underwent a radical transformation with the release of
Sgt. Pepper's Lonely Hearts Club Band


The entertainment industry is used to condition the public to accept the New World Order. Celebrities are part of the mind conditioning of the masses. Celebrities are very popular & have a lot of influence, & many people will follow their lead. One of the keys to PID is the Tavistock Institute.


Tavistock, England--This has been the primary programming center for England. The Rothschild programmers work out of Tavistock. A large number of slaves in America have been programmed there. Tavistock has been doing mind-control since before W.W.ll. Under the supervision of London’s W Board & 20 Committee MI6 and MIS’s Section BIA ran double agents and mind-controlled spies/couriers during W.W. II. MI6 has had an office at Century House, No. 100, Westminster Bridge Road. MI5 offices have been in part on Curzon St. MI5 has operated behind a number of fronts, incl. their fake travel agency Casuro Holidays. MI-5’s address for mail is Room 055, The War Office, London. Special Intelligence Service (SIS) dealt with all types of mind control. Tavistock was under SIS. The British government has had their own telephone exchange with a 222 prefix, which was later linked to another secret exchange YTAN. Outsiders could dial 222 8080 to get into the secret govt. exchange.

The Royal Free Hospital at the University of London works with Tavistock Clinic, as well as the Science Policy Research Unit (SPRU) of Sussex University. A large number of Britian’s psychologist, social workers and police get their training at Tavistock. Tavistock has set themselves up as the authority on ritual abuse and MPD (DID). In other words, the primary programming site, is pretending to be the leading institution trying to solve the problem! That’s a good cover. The Illuminati Formula Appendix I: The Programmers

I do not agree with his assessment about the Beatles' talent, but according to Lyndon H. LaRouche:

"The Beatles had no genuine musical talent, but were a product shaped according to British Psychological Warfare Division (Tavistock) specifications, and promoted in Britain by agencies which are controlled by British intelligence."

... Considering what happened to Harrison's former bandmate John Lennon on the streets of New York almost exactly 19 years before, and considering the Beatles' key, pivotal role in the mass social experimentation carried out by Britain's Tavistock Institute in conjunction with covert intelligence agencies like the CIA, NSA and Britain's MI5/MI6, we'd say there is a strong likelihood that Harrison, like Lennon, was NOT the victim of some random act of senseless violence.

In fact, Lennon was murdered shortly after he gave an interview to Playboy magazine in which he blew the lid off the fact that the Beatles were part of massive experimentation in social control/engineering unleashed by Tavistock and intelligence agencies, as was the deliberate introduction of drugs like LSD into the burgeoning "counterculture" scene during the 1960s and 1970s. The Playboy interview was published not long after Lennon's death.

We'd say it's a good possibility Harrison was targeted to be bumped off by some of the same forces responsible for rubbing out Lennon, using MK-Ultra/Manchurian Candidate-type mind-controlled assassin Mark David Chapman...

This is from the 1980 interview w/ John Lennon - shortly before he was assassinated.

LENNON: "Not in years. A little mushroom or peyote is not beyond my scope, you know, maybe twice a year or something. You don't hear about it anymore, but people are still visiting the cosmos. We must always remember to thank the CIA and the Army for LSD. That's what people forget. Everything is the opposite of what it is, isn't it, Harry? So get out the bottle, boy... and relax. They invented LSD to control people and what they did was give us freedom. Sometimes it works in mysterious ways its wonders to perform. If you look in the Government reports on acid, the ones who jumped out the window or killed themselves because of it, I think even with Art Linkletter's daughter, it happened to her years later. So, let's face it, she wasn't really on acid when she jumped out the window. And I've never met anybody who's had a flashback on acid. I've never had a flashback in my life and I took millions of trips in the Sixties."
http://www.whale.to/b/lennon1.html

Posted by Plastic Macca at 1:21 PM