"I know everything and I know the truth."
~ Heather Mills [Source] 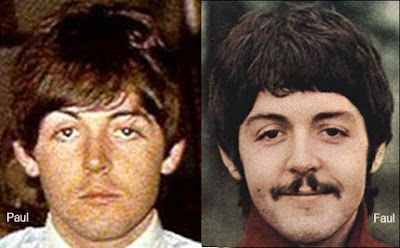 
Heather Mills gave an interview during her divorce from "Paul" McCartney to Access Hollywood's Billy Bush. In the interview, she said, "You know why I’ve left you. Protect me, and I will say nothing.” She said something so awful happened that was beyond belief. Someone she had loved betrayed her immensely, and not by infidelity. She says people don’t want to know what the truth is because they could never handle it. They would be too devastated.

Paul is Dead - the Rotten Apple 63 u (about Heather Mills):

“Knowing what you know now about Paul, would you have married him in the first place?” Billy asked.
“Never,” Heather said firmly.

Heather Mills’ Shocking New Claim: "I Have A Box Of Evidence," November 1, 2007, http://www.accesshollywood.com/billy-bush/heather-mills-shocking-new-claim-i-have-a-box-of-evidence_article_7285


Mills has said she put evidence in a box & gave it to a friend in case anything happened to her.

Heather Mills McCartney accused Paul McCartney of failing to protect her and their 3-year-old daughter Beatrice from abuse, which she says ranges from lies and slander to death threats...

"Do you fear for your life?" she was asked in a British Broadcasting Corp. television interview.

"And you are saying that Paul McCartney does not protect you and your child?"

She also appeared earlier in the day on an ITV television morning show, saying she had taken precautions because of death threats.

"I have a box of evidence that's going to a certain person, should anything happen to me, so if you top me off it's still going to that person, and the truth will come out," she said.

"There is so much fear from a certain party of the truth coming out that lots of things have been put out and done, so the police came 'round and said, `You have had serious death threats from an underground movement."'

On the BBC, she was asked if the tabloid newspapers were at fault.

"It's the tabloids and a certain party, but it is so extreme and so abusive ... I mean, I've been called monster, whore, gold digger, fantasist, liar."

"When you say certain party, do you mean someone from Paul McCartney's camp?" BBC reporter Maxine Mawhinney asked.

"I'm not allowed to talk about Paul and the court case and all that kind of stuff, because we are in court," Mills McCartney said.

"But it is, by clear implication, that's what you're saying," BBC reporter Jon Sopel said.

Heather Mills says she has box of evidence in case she's killed
http://www.katu.com/entertainment/10914886.html


I think Heather has been discredited by the media so that no one would believe her if she ever told the truth about Faul. Mills hints about what is going on behind the scenes:

MILLS: Married a legend and there's a machine behind. I can't really go into it. But, you know, you have to read between the lines. You know, there's a whole machine going on to create this negativity in Britain toward me.

MILLS: Well, I can't go into it. It's like, you know -- I just don't want to speak badly about Paul, you know?

I still love him and he's the father of my child. And, you know, there's things go on. Things are not what you see...

The Illuminati FAQ by Abner Whateley
...
8. Their first means of dealing with opposition is to buy it off. To any group as rich as the Illuminati, a few million dollars are nothing.

9. Next they try threats. Danger to possessions, status or loved ones has dissuaded many a would-be foe of Illuminati schemes.

10. And, of course, murder is an ancient political weapon. The Illuminati have been responsible for some of the most shocking assassinations of modern times.
...

12. Those who can't be dealt with any other way are discredited or driven mad.
...

The expression discrediting tactics in politics refers to personal attacks against a public figure intended to discourage people from believing in the figure or supporting their cause (see damaging quotations).

In public discourse, especially in societies with free speech, one of the most successful tactics to drain support from a cause is to discredit its spokesman. This tactic is similar to using an ad hominem argument in a debate. By discrediting the spokesman of a cause, the opponents of the cause hope that supporters or potential supporters will withdraw or withhold their support. In such a situation, the attitude seems to be: "If a person with this moral character or that level of intelligence supports the cause, it must be a bad cause." ...http://en.wikipedia.org/wiki/Discrediting_tactic