Paul McCartney is dead: proof he was replaced

~ The Beatles, "I'm Looking Through You" 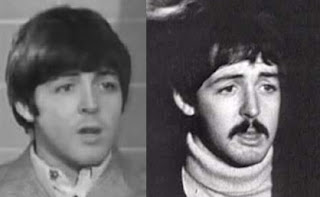 As shocking as it may seem, the real Paul McCartney is dead. He was imposter-replaced in 1966 by a double. This "conspiracy theory," called PID (Paul is Dead) for short, involves some of the following tangential issues:

The "official" PID story has it that Paul was killed in a car crash on or about November 9, 1966 and was replaced by look-alike William Campbell. This rumor first began in England in 1967. However, it picked up steam in the Fall of 1969 when clues allegedly planted by the Beatles themselves began to be uncovered.

On September 17th, 1969 The Drake Times-Delphic published what is widely considered the first printed account of Beatle Paul McCartney’s supposed death. Days after Drake undergrad Tim Harper asked the question “Is Paul Dead?” on the TD’s front page, college papers across the country ran with the story and the theory of “Paul is Dead!” raced across America.

On October 12, 1969, a Detroit disc jockey, Russ Gibb, received a call from a listener (“Tom”) insisting McCartney was dead and suggesting he play the Beatles' song ''Revolution Nine'' backwards. Gibb did, and heard “turn me on dead man, turn me on dead man.''

In an article in the August 2009 Italian issue of WIRED magazine, two forensic scientists conducted a biometrical analysis of Paul pre and post 1966. They set out to prove PID was a hoax, but they actually ended up proving Paul was replaced.

In 2009, two Italians, Francesco Gavazzeni (IT analyst) and Carlesi Gabriella (medico-legal), studied images of Paul McCartney taken before and after the alleged death, and claimed there is high probability that it is not the same person, based on analysis of the shape of the skull and jaw, the curve of the jaw, the ear, palate and teeth.[17].

The following are excerpts from the article. Please note that this is a machine translation of the original Italian. 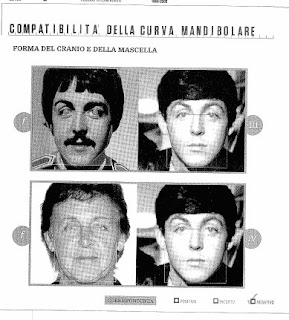 Jaw line: “The mandibular curve between the two sets of photos showed a discrepancy of over 6 percent, well beyond the threshold of error. But there was more. Changed the development of the mandibular profile: before 1966 each side of the jaw is composed of two curves, since 1967 appears to be a single curve. There is therefore a curve morphological different.” [Andriola and Alessandra Di Fabio Gigante, “Ask Who Was the ‘Beatle,’” WIRED Magazine, July 15, 2009, http://tinyurl.com/mw83db] 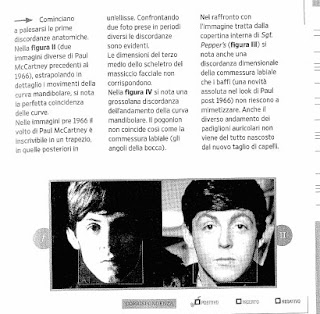 Nose: “[A]lways under the mustache of the McCartney Sgt Pepper's, maybe it was trying to hide something else: what the experts call it the nose-spinal or sottonasale [nasal spine: http://www.revisionrhinoplasty.com/anatomy.html]. This is the point between the two nostrils where the nose begins to fall off the face: ‘This is also in this case a distinctive feature that medicine cannot alter surgery. It can change the shape of the nose but not the nose-cord,’ says Gabriella Carlesi. ‘And McCartney from the first group of photos and the second point that clearly varies’” [Andriola and Alessandra Di Fabio Gigante, “Ask Who Was the ‘Beatle,’” WIRED Magazine, July 15, 2009, http://tinyurl.com/mw83db]

Ears: “Technically called trago [tragus: http://www.westone.com/content/234.html]. All we have two, one by ear, but the characteristics are different for every human being. ‘In Germany, a recognition procedure craniometric, identification of the right ear is even tantamount to fingerprint, ie the collection of fingerprints,’ recalls Carlesi. But what is trago? It is the small cartilage covered with skin that overhangs the entrance to the ear and ear canal, like the whole ear, cannot be changed surgically. How then to explain the differences between the right ear of Paul McCartney in a previous snapshot to 1966 and probably a built in the late nineties? It is not only to betray trago a different conformation as well as other parts, just above the ear canal entrance, measurements and dell'antelice propeller. Things that ordinary mortals might seem irrelevant or unclear, but instead, every day, allowing the experts to locate and identify persons, bodies, photographs.” [Andriola and Alessandra Di Fabio Gigante, “Ask Who Was the ‘Beatle,’” WIRED Magazine, July 15, 2009, http://tinyurl.com/mw83db]

[Please support this blog by clicking on the sponsors' ads - Thanks!] 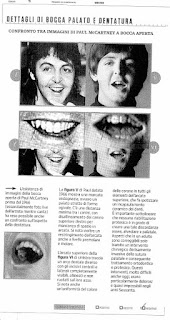 Lips: "Compared to the previous picture, that of Sgt Pepper's show clearly that the commessura lip, that is the line formed by the lips of the two, it was suddenly stretched. Which obviously is not possible and that the whiskers cannot camouflage. In other words, the phenomenon is all too frequent these days, the lips can be inflated and increased in volume, but the width of the lip commessura cannot vary that much. Maybe slight, but this is not the case for the photos examined: here the difference between the before and after is too strong to have been caused by any surgery.” [Andriola and Alessandra Di Fabio Gigante, “Ask Who Was the ‘Beatle,’” WIRED Magazine, July 15, 2009, http://tinyurl.com/mw83db]

Teeth & Palate: “There are impossible things and things that are possible but at the cost of operations long, painful and never perfect. Especially if done in the sixties. Now, careful examination of some pictures of McCartney before and after the 1966 autumn leaves, it must be said, in amazement: ‘First of all there is right upper canine,’ observes Carlesi Gabriella. ‘In the photos prior to 1966 is known as protruding relative to the line of teeth. It's the classic case of a tooth that lack of space it ends up misaligned, pushed out by the pressure of other teeth. It is curious that the same canines in the photos from 1967 forward, but without ever protruding apparent reason: the images show that the space would have to be aligned with the neighboring teeth. It's like if you wanted to recreate is a detail in a mouth where such an anomaly would have never been able to express.’ The real crux of the reasoning of dental identification suggested by Gabriella Carlesi covers the whole palate of McCartney that before 1966, appears close to the point of justifying various misalignments of the teeth, although in less obvious forms of upper right canine. After the publication of Sgt Pepper's Lonely Hearts Club Band, however, the palate of McCartney widens considerably, to the point that the front teeth do not rotate on the axis more as before. With the only on, than the usual canine. ‘A change of the shape of the palate, Carlesi concludes, 'in the Sixties was not impossible but would be very traumatic, the result of an actual intervention maxillo-facial. In practice McCartney should have been subjected to an operation that would involve the opening of the suture palate, broken bone and then a long prosthetic and orthodontic treatment. In other words, for a change so sensitive in the sixties to McCartney would be required not only a particularly painful and bloody, but also the use of a fixed orthodontic multiband then, for over a year. Which would not have been possible to hide and would be obvious repercussions on the performance of a vocal professional singer.’” [Andriola and Alessandra Di Fabio Gigante, “Ask Who Was the ‘Beatle,’” WIRED Magazine, July 15, 2009, http://tinyurl.com/mw83db]


The following comp is upside down to break the viewer's normal conditioning. The nose on the right is markedly longer than Paul's nose on the left. The images are screen captures from the Aug 19, 1966 Memphis interview (left) and an interview in Dec. 1966 in front of EMI studios. Both are supposedly Paul. 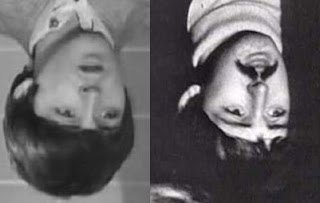 For more background information, please check out these radio interviews

This is Tina Foster's most recent interview on PID/ Paul is Dead:

The following is an article that sums up the WIRED Italia article. The full article is here:


This is confirmed by an investigation of "Wired"
It 'one of the best known legends of rock: Paul McCartney died in 1966 and what we know today is merely a double that has changed. A legend who just now seemed to have been dismantled and forgotten. But now two scientists have conducted an investigation for "Wired": The objective was to demonstrate that everything was false but the results were rather surprising ...

The object of the dispute is the "PID", or the legend "Paul Is Dead". Dedicarcisi A were two experts, the computer Francesco Gavazzeni legal and medical Carlesi Gabriella. The objective was to demonstrate that all these entries were false and unfounded, urban legends, in fact, throw a meal in the media and fans. The studies conducted by two experts however have led to quite unexpected results.

The story in brief: Paul McCartney, the original is in fact died in a car accident in 1966, a crash occurred on board of his Austin Martin after a quarrel with other members of the band. From that time to replace him there would be a double. Would have been the Beatles themselves to disseminate texts confirm this in the coming years more or less messages subliminal by allusive covers such as "Abbey Road", a message engraved on a disk on the contrary.

Gavazzeni Carlesi and were based on anthropometric and craniometrica, comparing, through images of repertoire, shape of the skull, teeth, etc.. in the before and after 1966. And, since these tests, however, we can express only in terms of compatibility and non-certainty, the results still give a negative result: that is, the person known as Paul McCartney before 1966 would not be the same that we see in the photos taken after that date. Case reopened?

There are also voice prints that prove that voice doubles were used on songs supposedly sung by Paul:


It is, in fact, true that body doubles are used extensively, which is the topic of The Splitting Image: Exposing the Secret World of Doubles, Decoys, and Impostor-Replacements by Tina Foster.

feed://www.howstuffworks.com/podcasts/stuff-they-dont-want-you-to-know.rss
Does the CIA use body doubles?
Conspiracy
Jan 1, 4:07 PM
Over the past decades, the CIA has been accused of everything from selling guns to assassinating people. Yet that's not the craziest part: Some people believe the CIA is actually replacing its enemies. Tune in and learn more in this episode.

I recommend these resources for further research:

Posted by Plastic Macca at 1:49 PM