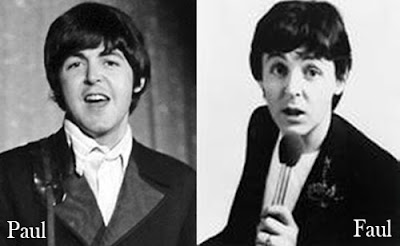 Some people may wonder how it is that Faul could sound so much like Paul. Doubles, such as political decoys, "are trained to speak and behave like their 'target.'" ["Political decoy," http://en.wikipedia.org/wiki/Political_decoys] The US Office of Strategic Services' Manual on Personal Disguises instructed spies to "[k]now the character ... you will have to be inside and out - their clothes, facial expressions, gait, gestures, personal habits, thoughts and reactions." This would include, one would assume, to know how the person speaks - the accent, intonation, etc. "The voice is easy to simulate and doubles constantly study video and audio records." ["Saddam's 'Double' Trouble: Opposition Leader Claims Hussein Died Of Cancer In 1999," 3-26-03, http://www.rense.com/general46/doub.htm]

Despite this subterfuge, voiceprints can be used to detect a double, because they establish identity. US federal law considers voiceprints to be unique identifiers that identify individuals:


[T]he term "record" means any item, collection, or grouping of information about an individual that is maintained by an agency, including, but not limited to, ... other identifying particular assigned to the individual, such as a finger or voice print or a photograph...
5 USCS § 552a(4).
[T]he term "means of identification" means any name or number that may be used, alone or in conjunction with any other information, to identify a specific individual, including any--
...
(B) unique biometric data, such as fingerprint, voice print, retina or iris image, or other unique physical representation; ...
United States v. Hawes, 523 F.3d 245, 249 (3d Cir. Pa. 2008); United States v. Mitchell, 518 F.3d 230 (4th Cir. S.C. 2008).
... [T]he district court found that duty titles were not comparable to captured immutable characteristics such as finger or voice prints or photographs. The district court reached these conclusions because an individual's duty title changes over time, because multiple people can concomitantly have the same or similar duty titles, and because each individual has predecessor and successor holders of the same duty titles. We agree with the reasoning and conclusions of the district court. In circumstances where duty titles pertain to one and only one individual, such as the examples of identifying particulars provided in the statutory text (finger or voice print or photograph), duty titles may indeed be "identifying particulars" as that term is used in the definition of "record" in the Privacy Act. For the reasons detailed by the district court, however, the [**9] duty titles in this [*188] case are not "identifying particulars" because they do not pertain to one and only one individual...
Pierce v. Dep't of the United States Air Force, 512 F.3d 184, 188 (5th Cir. Miss. 2007).

Above is a vocal comparison of Paul (left) & Faul (right): http://digilander.li...ruth/audio.html 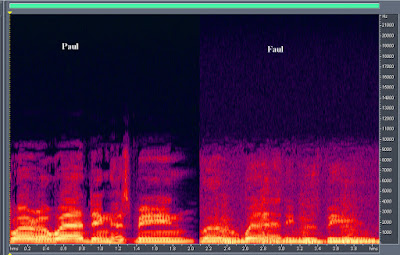 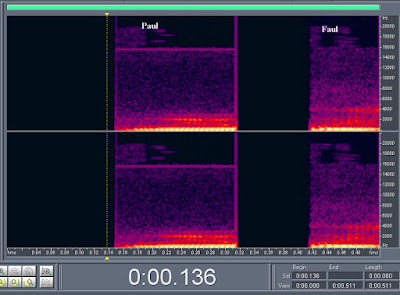 If the voice prints do not match up, then the songs were sung by different people. The studio magiCIAns at Abbey Road were pretty clever at disguising Faul's voice. They may have used such techniques as automatic double tracking (ADT) and speeding up and slowing down the tapes to distort the voice. George Martin, the Beatles producer, talks about studio magick at the beginning of Paul is dead - the rotten apple 51:

They also had others singing over the top of Faul's voice to disguise it, such as in "You Never Give Me Your Money" (also notice the distortion). Methods such as these made it more difficult for people to recognize it was not Paul singing. When you can focus on the voice, the difference is striking.

Unfortunately, it seems that technology can mimic a person's voice making it more difficult to identify a double using voiceprints.

"Gentlemen! We have called you together to inform you that we are going to overthrow the United States government." So begins a statement being delivered by Gen. Carl W. Steiner, former Commander-in-chief, U.S. Special Operations Command.

But it is not Steiner. It is the result of voice "morphing" technology developed at the Los Alamos National Laboratory in New Mexico.

By taking just a 10-minute digital recording of Steiner's voice, scientist George Papcun is able, in near real time, to clone speech patterns and develop an accurate facsimile...

Digital morphing — voice, video, and photo — has come of age, available for use in psychological operations. PSYOPS, as the military calls it, seek to exploit human vulnerabilities in enemy governments, militaries and populations to pursue national and battlefield objectives...

Whereas early voice morphing required cutting and pasting speech to put letters or words together to make a composite, Papcun's software developed at Los Alamos can far more accurately replicate the way one actually speaks. Eliminated are the robotic intonations...

Video and photo manipulation has already raised profound questions of authenticity for the journalistic world. With audio joining the mix, it is not only journalists but also privacy advocates and the conspiracy-minded who will no doubt ponder the worrisome mischief that lurks in the not too distant future.

An example of this voice morphing technology was the alleged call on 9/11/2001 on United Airlines Flight 93 from Mark Brigham to his mother:

Caller: "Mom? This is Mark Brigham." [Does it seem natural to use your last name when speaking to your mother?]
Caller: "I want you to know that I love you. I'm on a flight from Newark to San Francisco and there are three guys who have taken over the plane and they say they have a bomb."
Alice: "Who are these guys?
Caller: (after a pause) "You believe me, don't you?
Caller: "Yes, Mark. I believe you. But who are these guys?

They were fake! These voices were the result of the technological wonder called voice morphing in which the sound of anybody's voice can be duplicated in real time. If the full range of the subject's voice has been recorded, which usually can happen in a 10 minute phone conversation, and then fed into the computer software, anybody speaking the subject's language can very convincingly sound like the subject person on the phone to his or her family, friends, coworkers, etc. etc...

Posted by Plastic Macca at 2:24 PM