"If somebody tries to take my place,
Let's pretend we just can't see his face."
~ The Beatles, from "I'm Happy Just to Dance with You" 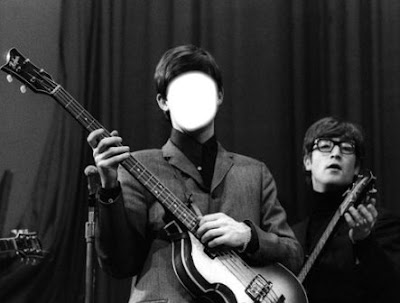 Light_man/Dakudo admitted to wiping Paul's face out so
he could superimpose Faul's face on the body.

In Doubles & Disguises, I wrote about the lengths to which intelligence agencies would go to create a double to impersonate another. In addition to creating elaborate disguises, "OTS specialists would ... alter hair color, apply facial hair, modify jaw lines, improvise dental work, create wrinkles, change complexion, or add glasses and warts to match any photographic documents..." [Wallace, Robert and H. Keith Melton. Spycraft. USA: Dutton, 2008 at 387] 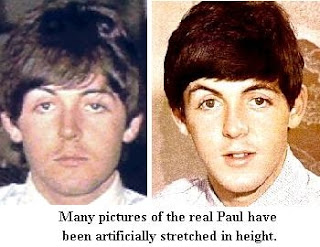 I believe that photo-doctoring has been used to further the illusion that Paul McCartney is "still with us" by making Faul look more like Paul and vice versa. The Italian forensic scientists also detected evidence of photo-tampering:

....And the surprises do not end there because the relentless Gavazzeni, like a boxer who feels close the ko [knockout] of the opponent, not the spring taken on the photo where McCartney, unaware, mentions a somewhat smug 'perplexed: "To the naked eye is known what will be a constant in the photos from that moment on, a couple of photo retouching fairly obvious to an expert eye. There is a gray area that covers the outside corner of left eye. Only for some time not seen before. And going to peep at that point, where for years there was one dark spot, now there is a cross between a scar and a sign of skin stretched like an aesthetic touch. The most immediate explanation is that probably, already in the sixties, has been made for an action on the eyes but it is still something imperfect, that for a long time has gone forward a mask. " Then there is a detail concerning the conformation of the skull: "Indeed, the impression is that the shape of the head was given a 'more rounded', Gavazzeni says:" So in the reduced effective length, by a trick used at the time and realized that being printed. Eff[ectively] change the conformation of the skull of an adult is something impossible. Yet, judging from the photos, is exactly what it shows...

[Please support this blog by clicking on our sponsors' links ~ thanks!] 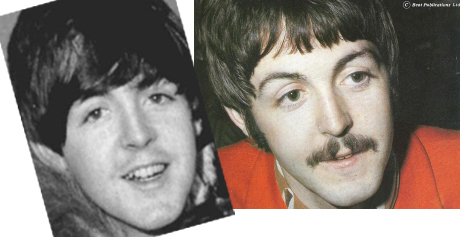 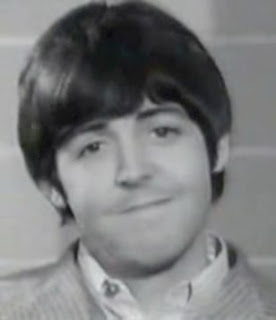 Comparing the above picture of Paul to an untampered video still of the August 19, 1966 Memphis interview makes it clear that Paul's face was rounder and fuller than the above comp would lead one to believe (left). 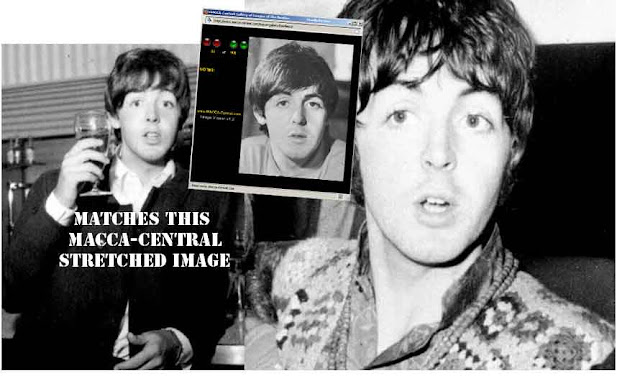 There are also composite pictures of Paul & the double. This example seems to be a 1966 picture of Paul that was recycled in 1967. The mustache looks very suspect, as though it were air-brushed in. 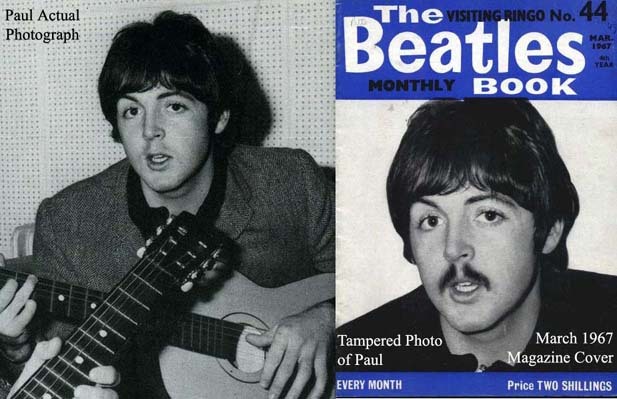 This picture is also a composite. If you look closely at the photo, you should see that there is a vertical line down the middle of the face made by the non-matching skin tones on the two sides of the face. If you must, get a magnifying glass to see the line. 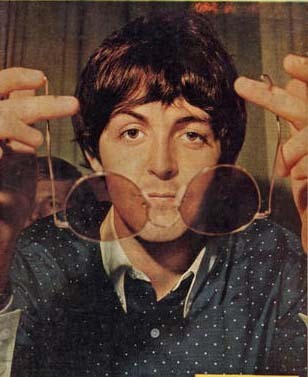 If you split the 2 halves apart, you can see that this photo is a composite of 2 different faces - Paul & some mystery person. You should see that the eyes & eyebrows don't match. A pic of Paul from that day is included as a reference to what he really looked like.

When you mirror each half side by side, you get Paul on the left photo, & someone who is definitely not Paul on the right picture. 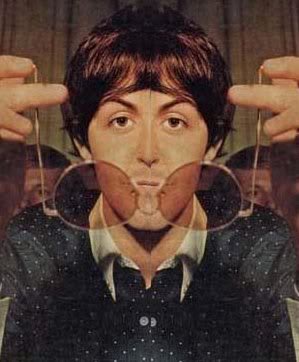 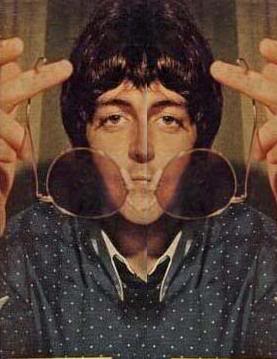 Who is that mystery man on the right? 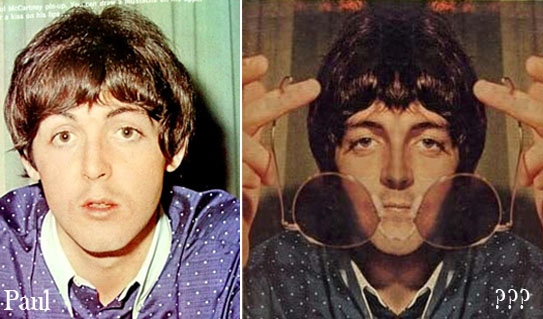 This comp shows Paul on the left from 1964. The two right-most pics are both from Sgt. Pepper. Doesn't the one on the far right look like a composite?

This is a variation on a theme. The two end pictures are Faul from Sgt. Pepper. The one in the middle is Paul from the 1966 "Butcher Album." Does it not look like they combined the first two to create "Paul" on the cover of Sgt. Pepper? 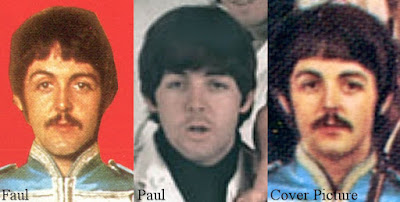 The official White Album picture of "Paul" (far right) seems to be a composite of Faul (left) and Paul (middle). Perhaps photo experts used layers to "blend" images of Paul and Faul together to create an image of the impostor that more closely resembled Paul.

Here is another example of an "official" photo of Paul that has been tampered with. It is from the Aug. 19, 1966 Memphis interview [available for purchase here: http://gallery.pictopia.com/memphiscom/gallery/S591993/photo/395357/] 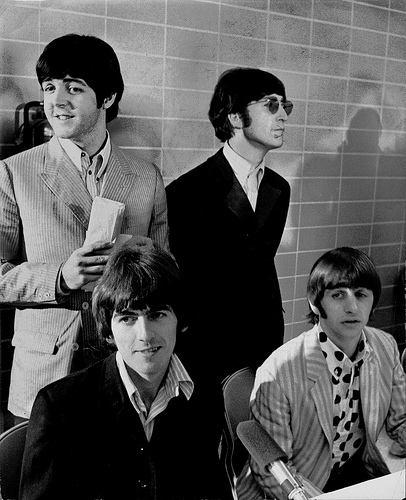 It looks as though the lower half of Faul's head has been put on Paul's head - it's a composite. Look at the eyebrows - they look like somebody's magic-markered them in. Also, the hair is black w/ no highlights - almost like shoe polish. And note the weird "v" where the line of Paul's cheek-crease has been broken by having Faul's face stuck on top of it. The cheek lines do not match up on either side of the face. You can also see that Paul did not have a stubbly face that day (the left image is a screen shot from that interview). 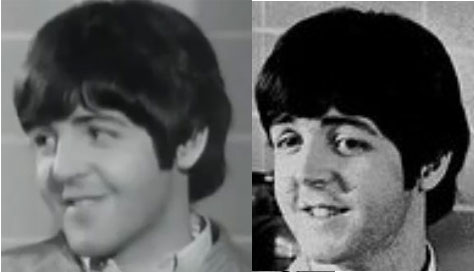 Here is the Memphis interview that day:

I asked Pictopia for an explanation as to why they were selling a doctored photo of Paul McCartney at the Memphis interview. I never received a response.

This appears to be a truer representation of how Paul looked that day in Memphis: 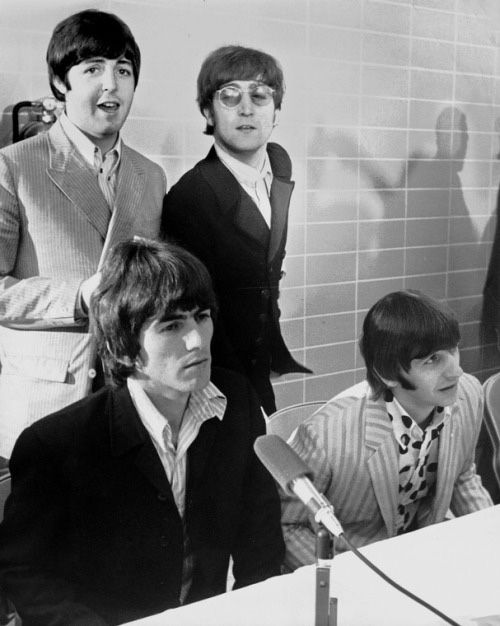 This picture also has an abrupt break in the cheek line, revealing that it, too, is a composite: 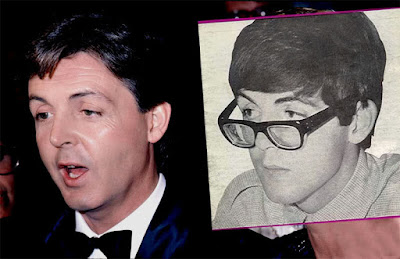 This obviously doctored photo (left)  was recently offered as "proof" that Faul's ears are the "same" as Paul's.

Faul's ears do not look like Paul's. That photo above has simply photo-shopped Paul's ear onto Faul's head. Please see Faul's false ears to see examples of what Faul's ears really looked like.

There also appears to be some composite of Paul and Faul on the "Let it Be" cover photo: 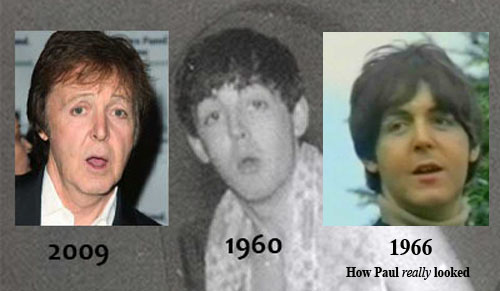 Here is an example of someone "faulsifying" Paul to make him more closely resemble Faul. The picture of Paul with the 1960 caption has had the face elongated, and has had other facial features tampered with. The picture to the far right is from 1966 and is a more accurate representation of how Paul really looked.
eatles - Paperback Writer - HQ -
Why would anyone do such a thing as tamper with photos of Paul? It's part of the cover-up. They (whoever "they" may be) are trying to confuse the issue about what Paul really looked like. They are training people to see some other guy as Paul.

This picture of "Paul" on the right was the result of wiping Paul's face out and superimposing Faul's face on it. Paul is on the left.

One can see that Faul's face has been added: 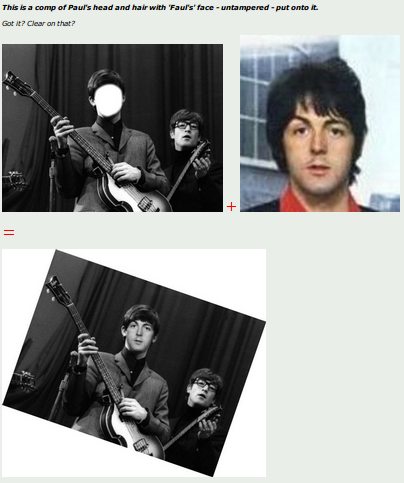 PIA'er Light_man/Dakudo admitted to doctoring the photo. One can only speculate as to his motive for flooding the Internet with faulsified photos of "Paul." Personally, I think it is a strategy to confuse the issue as to what Paul really looked like.

Here is another picture in which Faul's face has been pasted on to what was probably a picture of Paul. The face on the left has also obviously been elongated. 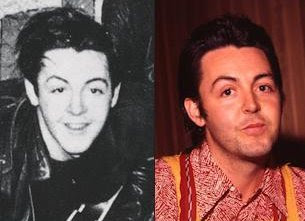 This picture on the right purports to be of a young Paul, but it has obviously been Faulsified: 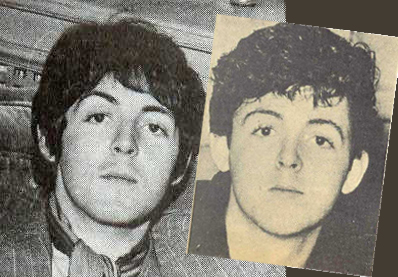 The Illuminati can pull the wool over people's eyes because many people don't have a great eye for detail, and aren't paying attention, anyway. Don't be duped by the double!

Posted by Plastic Macca at 2:15 PM